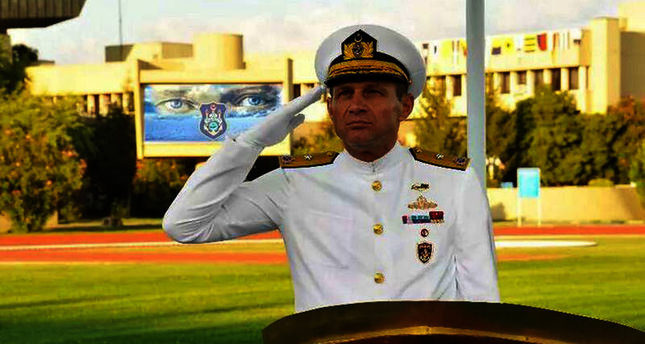 The shadowy Gülen Movement tried to purge top commanders and cadets at military academies through the use of anonymous complaints, according to Rear Admiral Türker Ertürk, former commander of the Turkish Naval Academy

ANKARA — Rear Admiral Türker Ertürk, former commander of the Turkish Naval Academy, claimed the Gülen Movement was behind a plot to purge top commanders and cadets at military academies.

Ertürk resigned from the academy in 2010 after a defamation campaign was launched against it. He claims that through unfounded media reports, anonymous complaints against alleged wrongdoings in the academy were part of a Gülenist plot. He said most anonymous tips were sent from email addresses registered in Pennsylvania, where controversial cleric Fethullah Gülen, who heads the movement, resides. Ertürk, a decorated military officer, said he first encountered the Gülenist scheme in 2008 when he was assigned as the commander of the academy.

"The next year, it got worse. We received thousands of anonymous emails and letters about cadets and commanders at the academy. They defamed cadets through baseless allegations," he said.

He noted that most complaints were about female cadets. "I found out that those complaints concentrated on successful cadets. I sensed then it was a deliberate campaign and personally investigated it. Defaming reports and tip-offs were published on websites and we received countless emails about allegations toward cadets. I checked the IP addresses of those websites and email senders and found they were mostly from Pennsylvania," Ertürk said. "I stood against their plot and they understood that they would not be able to infiltrate into the academy as long as I was there.

They tried to incite the public by spreading black propaganda about the academy. They claimed prostitution and homosexuality were rampant at the academy. They claimed conservative people were not allowed, we did not allow people to perform prayers and the academy's cadre mostly consisted of Alevis. The underlying purpose of this campaign was to eliminate cadets and officers and pave the way for Gülenist infiltration into the academy," Ertürk stated. "I did not allow investigations over anonymous tip-offs based on unfounded accusations. There was no evidence. One day, a team of investigators from Ankara visited me and said they would investigate the claims that 45 cadets were involved in homosexual affairs. I did not allow them to investigate because that would traumatize my cadets," he noted.

Ertürk said the Gülen Movement had an "imam," or point man, conveying instructions from movement leaders and coordinating the infiltration efforts. "I appealed to the higher command and asked them to investigate [the Gülenists] but they did not support me. I contacted a military prosecutor and he told them he couldn't investigate since this was an uncategorized crime. I could have appealed to a civilian court, but civilian courts are already controlled by [Gülenists]." He pointed out that the Turkish Naval Force is "less exposed to [Gülenist] infiltration," adding, "That was the reason the defamation campaign targeted us. They had to eliminate commanders.

There were five other admirals who would be promoted to a higher rank but all of them had to resign." Gülenists are also accused of forcing Land Forces Military Academy commander Reha Taşkesen in 2006 and Air Force Academy commander Sinan Şanlı in 2009 to resign by blackmailing them. Taşkesen resigned after allegations of his extramarital affairs surfaced. Ertürk said the Gülenists' ambition is taking over the Armed Forces through their followers within the army. "They will stage a military coup if they succeed."

He stated that the government was fighting the movement and called on the public to support the legitimately elected government. "If the movement takes over, democracy will come to an end in Turkey," Ertürk concluded.