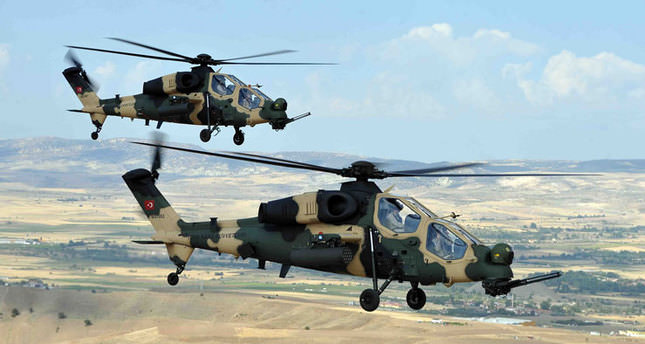 by Daily Sabah Apr 24, 2014 12:00 am
ISTANBUL — The Undersecretariat of the Defense Industry announced that the first T129 ATAK Raid Helicopter (ARH), which is the first domestically produced helicopter, was included in the inventory of the Turkish Armed Forces on April 22.

The ATAK was produced within the agreement signed between the Undersecretariat of the Defense Industry and Turkish Aerospace Industries (TUSAŞ) on Sep. 7, 2007, which envisages the supply of nine pieces of T129 ARHs helicopters.

The T129 ARH helicopter with two crews has two LHTEC CTS800-4ATurboshaft engines, each of which has a power of 1.360 horsepower and is able to reach a maximum speed of 288 kilometers an hour. With a maximum take-off weight of 5,000 kilograms, the helicopter has coverage of 556 kilometers. Carrying artillery of 500 projectiles of 20 millimeters on the nose, the T129 ARH helicopter can project 76 missiles with four pods under the wings.