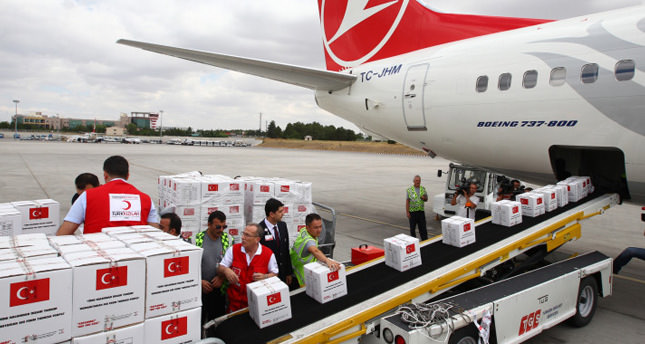 by AA Apr 27, 2014 12:00 am
IRBIL, Iraq — Turkey has delivered a convoy of humanitarian help to 100 Iraqi families displaced due to insecurity around Iraq's restive Anbar province.

Turkey started the delivery of an aid package worth $500,000 to help Anbar's displaced families with the cooperation of the UN refugee agency, Turkey's ambassador to Iraq Faruk Kaymakci said in a written statement on Sunday.

Earlier, Turkey had announced that it would provide humanitarian aid for 800 Iraqi families. Kaymakci said aid delivery would continue in accordance with the urgency and safety situations.

The Iraqi army has waged a major offensive in the Sunni-majority Anbar province since last December with the stated aim of flushing militants – who Baghdad claims are linked to Al-Qaeda – from the cities of Ramadi and Fallujah.

More than 140,000 people have been displaced from the province, according to the UN refugee agency.