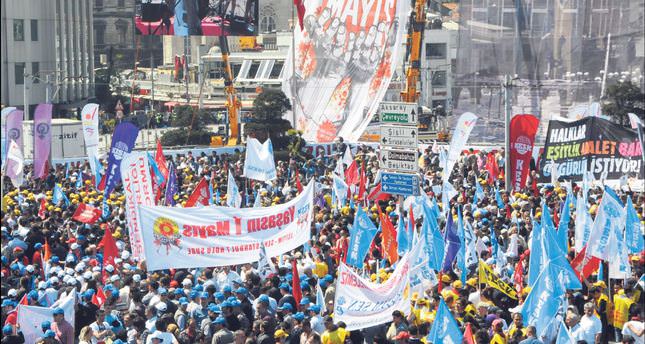 Some Turkish unions' insistence on observing Labor Day on May 1 in Istanbul's Taksim Square is facing strict opposition. The Supreme Court has issued a ruling against holding rallies at the square, while the Istanbul Governorate has advised unions to observe the event in other locations, citing that the event may be exploited by terrorist organizations aiming to incite riots

ISTANBUL — Unions have remained steadfast in their commitment to mark Labor Day in Taksim Square despite the Supreme Court's ruling in favor of a government decision banning Labor Day rallies at the square and the Istanbul Governorate's allocation of other sites for the unions to prevent riots on the grounds that the terrorist organizations may infiltrate rally participants to incite chaos. Labor Day is an important event for labor unions in terms of expressing their demands, but in Turkey, it has grim connotations of violent protests and a massacre. On May 1, 1977, 34 people were killed when gunmen opened fire on union members observing the day in Taksim. The massacre is regarded as a culmination of political upheaval marked by conflict between left-wing and right-wing movements.

The culprits were never caught, raising suspicions that the massacre was masterminded by Turkey's so-called deep state.

After the massacre, Taksim Square was offlimits to labor unions. The coup regime that came to power in 1980 declared celebrations illegal. Crowds that gathered for events were smaller in the years that followed. In 2007, on the 30th anniversary of the massacre, unions attempted to observe the event at the square with a large crowd, but the police dispersed the unauthorized rally. Later, celebrations were marked peacefully except for minor clashes.

Last year, union members, accompanied by radical groups affiliated with terrorist organizations, attempted to organize celebrations at the square. They clashed with police who moved in to disperse them.

Sedat Vural, a lawyer, filed a complaint against the government's ban on holding rallies in Taksim and asked the court to lift the ban "that violated freedom of expression and the right to hold a protest and rally." Yesterday, one day before Labor Day, the court rejected the appeal, citing that "not all other legal means were exhausted" for complaints on the ban.

The Istanbul Governorate, the ultimate authority on granting access to Taksim Square for unions, is determined to keep the ban in place.

The governorate issued a statement on Labor Day and said they had obtained intelligence that terrorist organizations and their affiliates will take advantage of rallies in Taksim and carry out attacks against police officers deployed there. The statement said that the constitution and European Convention on Human Rights (ECHR) granted the right to hold rallies to all but that the locations of those rallies are regulated under laws as well. It continued that the Yenikapı area on the European side of Istanbul was an appropriate location for rallies and recommended that the unions organize the event there. The governorate also allocated buses to Yenikapı for people who will attend the rallies.

The governorate noted that an uncontrolled rally that might escalate into a riot at Taksim Square would endanger the lives of participants and that evacuation of the square in the case of riots would be difficult to handle. "Taksim Square and its vicinity is not suitable for massive rallies as vehicle and pedestrian traffic is high in this area," the statement added.

Asked about the ban yesterday, Istanbul Governor Hüseyin Avni Mutlu said they were tasked with "ensuring the safety of people." He also reassured about possible lags in public transportation due to the rallies. Mutlu said the Marmaray undersea tunnel, the subway, metrobus lines and ferries will be available on May 1, while Karaköy, Eminönü, Sirkeci and Beşiktaş ports will be closed.

On security threats necessitating the ban on Taksim, Mutlu said that intelligence units had information on planned attacks targeting the rallies and noted that several suspects were captured.

Turkish police launched operations this week against terrorist organizations planning to stage attacks on rallies. On Tuesday, four people were arrested in an operation in Istanbul.

The police seized two Kalashnikov rifles, pistols and a remote-controlled explosive device in the operation. Yesterday, 18 people were detained in the city's Sarıyer district in an operation against the Revolutionary People's Party-Front (DHKP-C). The police said suspects were armed and were involved in the extortion of local businesses. The DHKP-C is blamed for violent riots during the Gezi Park protests in 2013 and accused of inciting attacks against the police during the violent protests. Affiliates of the terrorist organization took to the streets in March after the death of a Gezi Park protester and claimed responsibility for the killing of a 22-year-old man during the protests.

Minister of Labor and Social Security Faruk Çelik called on the country's trade unions to give up their demand for holding rallies at Taksim Square. He said the government had taken steps in favor of laborers including the declaration of the previously banned day as an official holiday, "Day of Labor and Solidarity." "I hereby call on the unions insistent on holding a rally in Taksim Square to take a step for the sake of public security and hold their rallies at Yenikapi Square instead," he said, adding that Taksim was not appropriate for such a large-scale rally and there were two proper squares for that purpose in the city. "The Istanbul governorate will provide all conveniences and logistics for the unions, which will celebrate Labor Day in other squares," he said. Çelik stated that the Confederation of Real Trade Unions (HAK-İŞ) and the Confederation of Turkish Labor Unions (TÜRK-İŞ), the country's two biggest unions announced that they will hold rallies in other squares, but there were some unions who tried to provoke street violence.

The authorities' refusal to revoke the ban drew the ire of unions. The organizing committee for the Labor Day rallies held a press conference yesterday and spoke out against the ban.

Kani Beko, chairman of the Confederation of Revolutionary Workers' Unions (DİSK), said at the press conference that the ban was "illegitimate and unwise." He claimed the government was imposing martial law for Labor Day. Pointing out that unions filed a lawsuit against the ban in the European Court Of Human Rights in 2008 and that the court urged Turkey to allow Labor Day celebrations in Taksim Square.

Beko said they would defy the ban and go to Taksim Square. Referring to Governor Mutlu's remarks, Beko said the governorate used intelligence concerning the possibility of terror attacks as a pretext to prohibit unions from observing the day in past years as well. "A hypothetical risk of threat to public order is not a legitimate reason to ban a peaceful rally," he said, citing that a Turkish court ruled against the ban on the grounds of security risks in 2008. "We observed Labor Day at the square in previous years, and nobody was hurt. We can do it again. Nobody will be injured if the police do not intervene," he said.

DİSK and the Confederation of Public Workers' Union (KESK), along with smaller trade unions and several nongovernmental organizations, are among the proponents of Taksim Square celebrations, while other trade unions whose members are mostly right-wing workers, prefer other spots in the city for Labor Day rallies. Moreover, a survey by an independent research company on the issue showed most workers agree with the ban in Taksim. A total of 2,478 individuals from 36 provinces participated in the survey from April 4 to 11.