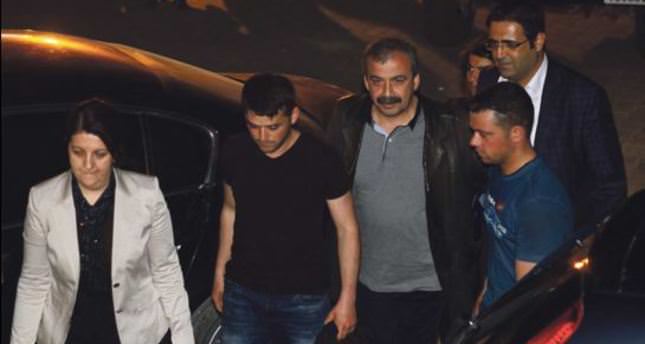 The soldiers were kidnapped when gunmen stopped a bus on a highway near the town of Lice as the bus caught fire in a traffic snarl due to the blocking of the road by people protesting the construction of a military outpost and abducted the two military officers. Two other civilians were also abducted but their fate is not yet known.

It was initially suspected that the terrorist organization PKK was behind the kidnapping but no official statement was made to that extent.

Pervin Buldan, İdris Baluken and Sırrı Süreyya Önder, deputies from the People's Democratic Party (HDP), a proponent of peace negotiations with the PKK, met the abductors, who handed over the two military officers.

A website affiliated with the PKK announced that the officers would not be released until authorities announced the halt to construction of the outpost. Turkish security forces launched a manhunt to find the officers.

Speaking after bringing the released soldiers to Diyarbakır from an unknown location, Önder declined to reveal who was behind the kidnapping. "It is of no use to say who did this," he said.

Speaking to reporters, Buldan said the HDP would take responsibility for raising the voice of people against the construction of military outposts and it would negotiate with groups opposing the construction in the case of "a repeat of such problems," referring to the kidnapping.

Construction of military outposts in the region often face protests by activists, particularly those linked to the PKK, who claim that new security installations will derail the peace process.