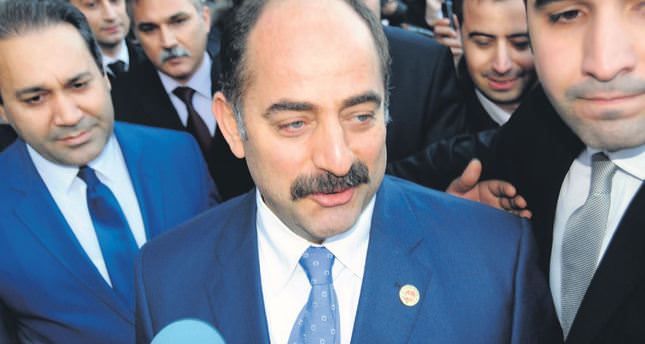 The report of inspectors investigating allegations concerning three prosecutors and a judge linked to the Gülen Movement who conducted the Dec. 17 operation has revealed an unusual increase in the income of Zekeriya Öz, one of the prosecutors who made headlines with his posh vacation in Dubai

ANKARA — The inspectors' report on Öz and two other prosecutors and a judge affiliated with the controversial Gülen Movement, who were behind the Dec. 17 operation that sought to defame government officials, reveals that Öz's income increased unusually in three years. Öz made headlines in past months when media reports showed the prosecutor with a modest salary spent a luxurious vacation in Dubai with his family. The Supreme Board of Judges and Prosecutors (HSYK), which oversees the appointment and suspension of judiciary members, had greenlit a criminal investigation into the wrongdoings of the prosecutors and judges involved in the Dec. 17 probe after HSYK inspectors found substantial evidence implicating them.

According to the recently revealed report, inspectors detected a TL 290,000 discrepancy in Öz's income and expenses between 2009 and 2012. The report noted the prosecutor was not able to show a receipt regarding his Dubai vacation and recommended a further investigation into how Öz accumulated TL 290,000.

The Sabah daily had revealed Öz's controversial vacation, and after media reports contested the prosecutor's claim that he paid expenses out of his own pocket, Ali Ağaoğlu, a construction magnate, said his company covered the expenses for the vacation. Öz stated he would issue a receipt about the vacation after Ağaoğlu's statement, but he has not released any receipt so far. According to reports in the Turkish media, friends of Öz visited Ağaoğlu and asked him to give them the bills regarding Öz's vacation.

HSYK inspectors said the evidence or lack thereof necessitated a criminal investigation on whether the prosecutor's vacation was paid by the businessman or not.

The report also stated that there were serious allegations claiming Öz had exerted pressure on police officers continuing the Dec. 17 probe. He is accused of forcing police officers not to suspend the Dec. 17 operation using his influence during his visit to Istanbul National Police headquarters on Dec. 19.

Öz may be ousted from the judiciary or tried by the Supreme Court if the criminal investigation finds he is guilty of irregularities.
Along with Öz, prosecutors Muammer Akkaş and Celal Kara and Judge Süleyman Karaçöl are being investigated by HSYK inspectors. They are accused of irregularities in the registration of the Dec. 17 investigation into the National Judiciary Informatics System (UYAP), a network where such cases are registered and thus, hid the investigation from their superiors.

Öz is a prominent prosecutor who oversaw a series of investigations, including one into the Ergenekon coup plot that led to the imprisonment of dozens of generals and civilians.

He claimed that Prime Minister Recep Tayyip Erdoğan threatened him after the Dec. 17 probe, but he could not prove this allegation. According to media reports, the prosecutor installed a camera in his office before the Dec. 17 probe and recorded private conversations.

He was in possession of a hard disk on which the footage was stored and deleted it after his reassignment.

Following his suspension and before his reassignment, he was asked by prosecutors to hand over the footage captured by the camera, but Öz reportedly contacted "a high-ranking official" at the courthouse to delete the contents of the hard disk. The disk was empty when it was handed to the prosecutor's office. The prosecutors who spearheaded the Dec. 17 operation are accused of acting under the orders of the "parallel state," a name attributed to the Gülen Movement of U.S.-based cleric Fethullah Gülen and its coconspirators who allegedly sought to overthrow the Justice and Development Party (AK Party) government through a defamation campaign.