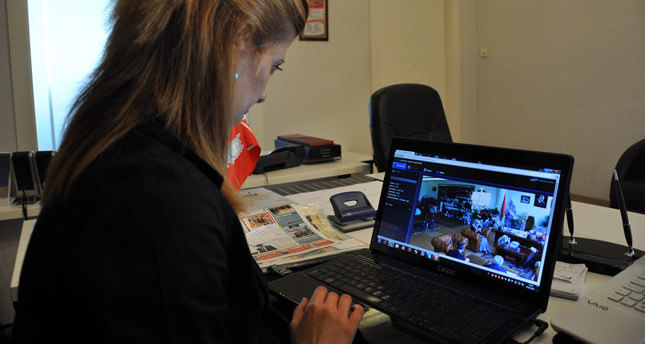 A mayor in the Turkish town of Gürsu in the province of Bursa installed a camera in his office as part of his efforts to increase transparency in his administration. Viewers can watch the mayor's office online around the clock

BURSA — The office of the mayor in the Turkish town of Gürsu presents the next level in government transparency with the online streaming of footage of what the mayor is doing in his office at all times.

Cüneyt Yıldız, who was elected mayor of the small town of Gürsu from the ruling Justice and Development Party (AK Party) in the northwestern Turkish province of Bursa in the March 30 elections, installed a camera in his office after he took the position.

Clicking on a link titled "Watch the Mayor" on the website of the municipality, gursu. bel.tr, his electorate can see what the mayor is occupied with at any time of the day.

The mayor said in an email to Daily Sabah that he had long been a defender of transparency. "I have been in the business world for a long time and in my commercial affairs I have always been transparent. For instance, the door to my office in the jewelry store I ran before the mayoralship has always been open.

There will be more similar applications in the future," he said.

Yıldız went on to say that people's reactions to the camera system have been "amazing." "People praised us for this system both on social media and calling into the municipality.

We even received phone calls from other cities such as İzmir congratulating us for installing a camera in the office," Yıldız stated. The mayor said he had always wanted to be close to the people. "I give citizens my cellphone number so that they can call me anytime. I want to solve people's problems as soon as possible, so accessibility is important for me."

Yıldız's move is reminiscent of a bid for honesty by another municipal official in the northern province of Tokat. Sefer Bayın, deputy mayor of Tokat, complained he was paid a salary even though he did not do anything.

Bayın released a message on social media websites and said he had nothing to do though it had been 37 days since he took office. "I have nothing to do, but they pay me well and in advance," he wrote.

After the message went viral, Bayın spoke to reporters and said he likes to work, but he was not given any tasks. He claimed the mayor expected him to resign for "restructuring" in the municipality so he was not given any real task. "I am paid TL 5,193 every month, and I want to deserve it. I want to work," he told reporters. Bayın stated he would resign if the public demands it but will continue to come to work every day if people want him to stay on and "continue his struggle to get a real task." Bayın, who served as deputy mayor in previous terms as well, said in 2012 he did not do anything for three years but still got paid.

Bayın said he released the statement on social media to hear what fellow members of the ruling Justice and Development Party (AK Party) think about him. "I admire Mr. Prime Minister. I have always supported him and continue to support him," he said, adding he would continue raising his voice against being kept idle.
RELATED TOPICS