Fire in coal mine kills at least 238 workers in Soma 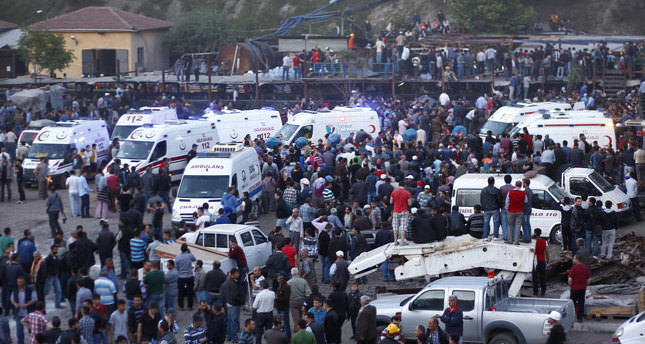 by May 13, 2014 12:00 am
MANISA — A fire in a coal mine in Turkey's western province of Manisa killed at least 238 miners on Tuesday, Soma's Mayor said and as many as 500 more may still be trapped. There were 787 workers in the mine when a power transformer exploded and set fire to the mine.

Local member of parliament Muzaffer Yurttas told broadcaster NTV that the bodies of countless workers, believed to have died from suffocation and burns, had been retrieved from the mine and that at least another 75 workers had been taken to hospital.

"They are pumping oxygen into the mine, but the fire is still burning. They say it is an electrical fault but it could be that coal is burning as well," Tamer Kucukgencay, chairman of the regional labour union, told Reuters by telephone.

Energy Minister Taner Yildiz confirmed that a fire had been triggered by an electrical fault and that workers had been killed, but declined to say how many.

The blast happened during a change in shifts, leading to uncertainty over the exact number of workers still in the mine, labor union officials said.

Nurettin Akcul, national head of the Turkish Mineworkers' Union (Maden-Is), told CNN Turk television that an unknown number were still trapped after the blast, which he said happened around 2 km (miles) below ground.