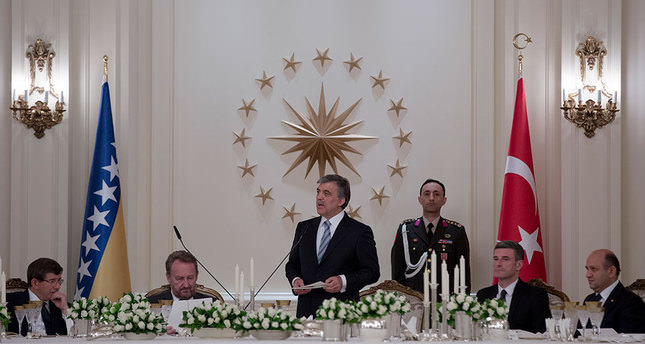 by AA May 13, 2014 12:00 am
ANKARA — Bosnia Herzegovina's political unity and territorial integrity should be respected by the international community, Turkey's President Abdullah Gül has said.

Gül, at a dinner given in honor of Bosnian President Bakir Izetbegovic's official visit to Turkey on Monday, added that "Our primary wish is a prosperous and peaceful Bosnia in the future and the erasing of all traces of suffering of Bosnians in recent decades."

Gül continued saying that Bosnia Herzegovina "under the large roof" of institutions such as NATO and the EU will be much more able to overcome its problems and that the upcoming presidential and parliamentary elections in October will be a milestone for the realization of necessary reforms in the country.

Izetbegovic in reply expressed feelings of honor over the strong partnership with Turkey, saying that "Our centuries old cultural ties are so deep and strong they cannot be undone. In the future, those relations will be further strengthened."