'Losing hope of rescuing more' in Turkey mine blast 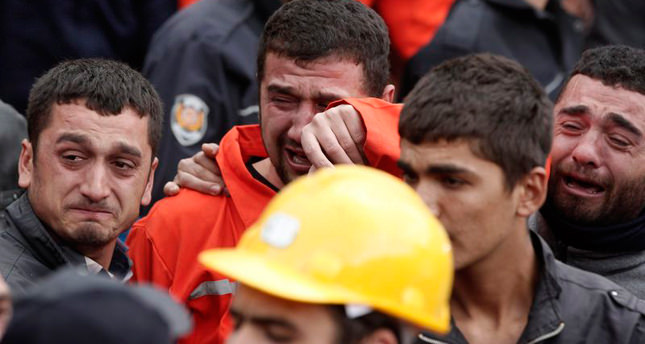 by AA May 14, 2014 12:00 am
MANISA — Hopes of rescuing any more trapped coal miners from a mine in western Turkey are fading, according to officials, after nine were evacuated Wednesday morning.
"We are worried the death toll may rise,'' said Energy Minister Taner Yildiz. He said oxygen continues to be pumped into the coal mine in Soma, where a fire continues to burn. The disaster has killed 201 miners and could potentially become the worst mining disaster in Turkish history.
Yildiz said autopsies have been carried on 72 bodies and funerals will be held for the victims. Identification of the workers' bodies will be carried out until noon Wednesday, officials said.
An exact cause of the blast has yet to be officially announced. Yildiz said the deaths were due to carbon monoxide poisoning and ruled out the possibility of firedamp or methane gas explosion.
The energy minister said he could not verify how many people are trapped in the mine until all workers are evacuated.
An explosion and fire in the district of Soma in Manisa province followed an electrical fault on Tuesday afternoon.
Yildiz said 363 out of the 787 workers at the privately owned mine have been accounted for, including those who died. Yildiz said 80 people were rescued with injuries - four of them in critical condition.
The explosion took place during a shift changeover, Yildiz has underscored, heightening concerns that the death toll may rise.
The workers are thought to be 3.5 kilometers away from the entrance to the mine. Yildiz said the fire broke out 150 meters underground.
Yildiz assured transparency over the whole incident and said the priority was to reach the trapped miners.
More than 3,000 people have died and over 100,000 injured in mining accidents since 1941 in Turkey, government statistics agency TurkStat's figures show.
Mines and stone quarries are the most dangerous places for Turkish workers. According to data, more than 10 percent of work-related accidents in 2013 happened in the mining sector.
Last Update: May 14, 2014 6:31 pm
RELATED TOPICS