Turkish President orders to use all means available 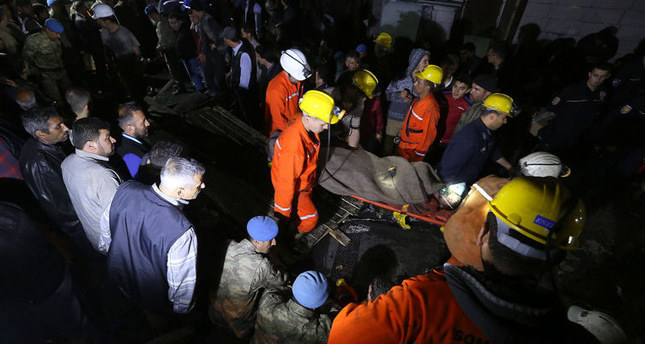 by AA May 14, 2014 12:00 am
MANISA — President Abdullah Gül has ordered the Manisa Governor's Office to use all means available to state officials to rescue the miners.

Prime Minister Erdoğan, who has canceled a trip to Albania to pay a visit to the province, has offered condolences to the families of those who died.

Main opposition leader Kemal Kılıçdaroğlu has also canceled all his engagements to visit the area on Wednesday.

A huge crowd of relatives of the miners continue to wait outside the mine for good news on the rescue efforts. Another crowd of relatives flocked to the district's hospital to learn about the medical situation of the injured miners rescued.

A relative of an injured miner, Sema Korkmaz, said rescue teams were trying to reach her husband who had been working in the mine for eight years, but they failed. "We have not heard from him yet. One of his mate was rescued, who is at hospital."

Energy minister Taner Yıldız assured transparency over the whole incident and said the priority was to reach the trapped miners.
"Time is working against us. We are facing a great adversity," he said.

The minister said efforts continue to clean up the carbon monoxide gas inside the mine, indicating that it might cause more deaths in the meantime.

"Unfortunately, I'm carrying out one of the toughest duties for an energy minister," Yıldız said. "And I'm saying this with concern that our distress might exacerbate in the coming hours."

Yıldız's announcement raises fears this might become the biggest mining disaster in Turkish history, with hundreds of workers still stranded below the soil.

The greatest mining tragedy in Turkey occurred two decades ago in 1992, when a firedamp explosion killed 263 people. The second and third highest death tolls were in 1983 and 1990, respectively, leaving 103 and 68 dead in methane gas explosions.
More than 3,000 people have died and over 100,000 injured in mining accidents since 1941 in Turkey, government statistics agency TurkStat's figures show.

Mines and stone quarries are the most dangerous places for Turkish workers. According to data, more than 10 percent of work-related accidents in 2013 happened in the mining sector.