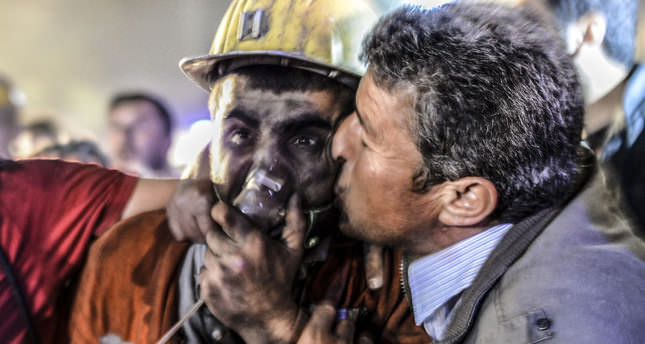 Flags all over the country are flyying at half-mast to mourn the hundreds who lost their lives in the Soma mine accident, while the prime minister says around 120 more miners may be trapped and efforts to rescue them will continue around the clock

MANISA — An explosion and subsequent fire trapped hundreds of miners on Tuesday at a coal mine in the western Turkish town of Soma. The death toll in the disaster was 282 as Daily Sabah went to press, while 88 miners have been rescued with injuries in two days of efforts. Turkish Minister of Energy and Natural Resources Taner Yıldız said the accident was the worst mine accident in the history of Turkey, and hundreds of miners remained trapped in the mine. The tragedy struck on Tuesday afternoon when a transformer supplying power to the mine operated by a private company exploded and led to a blaze that trapped miners kilometers beneath the surface. Initial reports put the death toll at 20, but as the hours passed, a grim portrait of tragedy emerged as it was revealed that the accident was far more fatal than previously thought. Search and rescue crews, including miners from other mines, advanced through the depths of the mine - 3.5 kilometers. Survivors were brought to the surface, along with bodies, as a large crowd of families anxiously waited at the entrance of the mine. The crews pumped oxygen into the mine to keep the trapped miners alive.

As the removal of bodies began, relatives flocked to hospitals to find out whether their loved ones were among the casualties. The morgue in the town's hospital could not accommodate the corpses, and a cold storage warehouse was used as a morgue. A team of 300 psychiatrists was dispatched to the hospital and the mine to offer assistance to the distressed families.

Yıldız, overseeing the search and rescue operations, told reporters earlier that they estimated there were 787 miners but later retracted this statement, citing it as "an estimated figure," and the exact number will not be revealed in consideration of families anticipating good news for their loved ones. In a statement during a visit to Soma, Prime Minister Recep Tayyip Erdoğan said the number of trapped miners is estimated to be around 120.

Speaking on Wednesday morning, Yıldız said they handed over the bodies of seven miners to their families after their identification, and the autopsy of other corpses was underway. Yıldız said a judicial investigation would be launched after the conclusion of search and rescue operations. Later yesterday, the chief prosecutor's office announced they had launched an investigation into the accident as well as allegations that there were illegal workers involved. Social Security Agency (SGK) Deputy Director Mustafa Kuruca stated they would also launch an investigation after one of the bodies removed from the mine was found to be a child worker. "This is a devastating loss we did not expect," Yıldız told reporters.

He stated that the miners did not die from an explosion, burns or firedamp explosion but rather from carbon monoxide poisoning. "We are sadly witnessing the death toll increase," Yıldız said. Initial autopsy reports performed by the coroner's office on 17 bodies indicated that the victims died of carbon monoxide poisoning, as the minister stated earlier. Autopsies were carried out on 72 bodies, and 124 bodies have been identified so far.

He stated that the fire receded at one point but flared up later, and some miners were trapped along the path the fire was advancing.
He added that they predicted miners were stranded far from the sites reached by the flames. Yıldız said the operations were slowed out of concern for the health of the search and rescue crews, which had to struggle to advance in the face of massive smoke engulfing the galleries. Yıldız said the fire broke out 150 meters underground. He assured transparency of the whole incident and said the priority was to reach the trapped miners. "Time is working against us. We are facing great adversity," he said. The minister said efforts continue to clean up the carbon monoxide gas inside the mine, indicating that it might cause more deaths in the meantime. "Unfortunately, I'm carrying out one of the toughest duties for an energy minister," Yıldız said. "And I'm saying this with concern that our distress might be exacerbated in the coming hours."

A later statement by the Disaster and Emergency Management Presidency (AFAD) said 63 people had been discharged from hospitals, while 25 others were still undergoing treatment. The explosion came at a time when miners ending their shift were heading to the surface, and their replacements were descending into the mine; the high number of workers in the mine at the time of the accident is attributed to the shift change.

Miners' unions expressed outrage at the accident. The Union of Mine Workers (Maden-İş) issued a written statement and said if any fault is detected regarding the accident, the union will "call those responsible for it to account." The union said in the statement that Turkey topped countries in Europe in terms of mining accidents. Speaking to the media, İsmail Koncuk, president of the Turkish Civil Servants Union (Kamu-Sen), said it was sad that miners fall victim to "preventable" accidents. He blamed the Soma accident and previous accidents on a mindset attaching more importance to profits than safety measures.

The Confederation of Turkish Trade Unions (TÜRK-İŞ) announced that its members would not work on Thursday to protest the deaths. TÜRK-İŞ has over 700,000 members across Turkey. A statement by the Confederation of Revolutionary Trade Unions (DİSK) followed. Confederation Secretary-General Arzu Çerkezoğlu said that along with DİSK, members of the Confederation of Public Workers' Unions (KESK), the Union of Chamber of Turkish Engineers and Architects (TMMOB) and the Turkish Medical Association (TTB) would not work on Thursday. Çerkezoğlu called on the public to protest the Ministry of Labor and Social Security and wear black ribbons in memory of the accident victims.

Speaking to Daily Sabah about the accident, Mahmut Arslan, president of Confederation of Turkish Real Trade Unions (HAKİŞ), said he was deeply saddened by "the greatest mining accident in the Turkish history. Hundreds of our friends lost their lives and some are still trapped. We hope they make it alive, though this possibility is declining," he said. "Ministry of Labor and Social Security declared no workplace safety violations were found in regular inspections. The employer, one of the largest mining companies in Turkey, claims it modernized the facilities and took every measure to ensure the safety of workers. Yet, there is something wrong apparently," Arslan said, adding that the private sector naturally planned more profits and more production and regarded "workers a part of production rather than human beings... This is the real problem: a mindset lacking a human focus," he said. Arslan said state-run mines had fewer casualties in terms of mining accidents. "For example, Turkish Hard Coal Enterprises (TTK) extract coking coal in Zonguldak [northern Turkey] and there are private companies there as well. The number of deaths per 1 million tons of coal at the mines operated by the private sector is three times higher than the deaths per 1 million tons of coal at mines operated by TTK, a state-run company."

He also noted that laws existed for the improvement of safety in mines and mining companies mostly complied with them, yet this did not stop accidents. Arslan attributed accidents and fatalities to a common mistake: a lack of consideration for safety during the conception of mines. "A safety system should be created prior to the construction of the mine, while it is still a blueprint. There are no regulations in Turkey to ensure planning for safety in the project phase of the mine's construction. This is not the case in developed countries.

They prioritize safety before they develop the mine. Turkey should follow this example," he said. "You cannot prevent accidents no matter how many safety measures you take unless you plan for the safety first." Arslan also cited a lack of union work in the private mining sector. "There should be committees for occupational safety to monitor the safety measures but they don't exist because of a lack of unionization," he said. The HAK-İŞ president criticized occupational safety experts whose employment was made compulsory through recent regulations. "Those experts are paid by the company so they cannot act independently.

They may not point out the faults in safety since they are on the company's payroll. The existing laws allow companies to fulfill the minimum requirements for occupational safety," he added. Arslan called on the government, unions, private companies and academics to discuss the matter of occupational safety together. "Other countries such as the United States, China and Canada manage to increasingly drop the rates of fatalities in such accidents. Turkey can do that too. We can take measures. For this reason, the lives of people should be given primary consideration, not profits," he concluded.

SOMA Kömür İşletmeleri A.Ş., which operates the mine, shut down its website and instead issued a statement conveying condolences to the families of deceased miners. The statement said the accident occurred despite the "highest safety measures and constant controls."
A group of activists staged a sit-in strike outside the corporation's headquarters in Istanbul's Levent district yesterday. They unfurled banners condemning the company and chanted slogans. Riot police were deployed to the scene. No staff was present in the building when the group of protesters arrived. Some protesters spray-painted slogans on the door and walls of the building.
Last Update: May 15, 2014 10:11 am
RELATED TOPICS