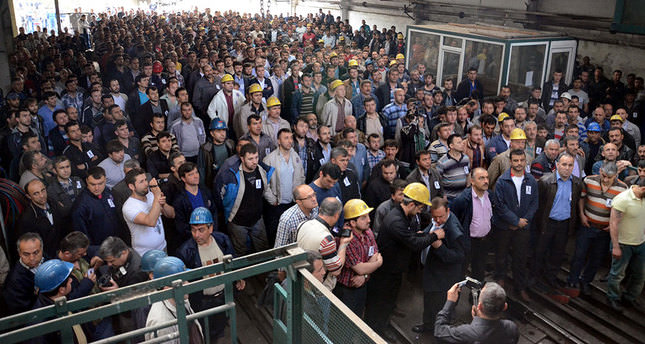 by AA May 15, 2014 12:00 am
ISTANBUL — Turkey's major unions have announced a one-day strike in protest over the deaths of 282 workers in the western Manisa province coal mine disaster.

The announcement on Wednesday came after three days of mourning was declared in Turkey following the deaths of the workers in the mine blaze in the district of Soma.

Çerkezoğlu expressed her condolences to the victims of Tuesday's disaster.

Hundreds of miners are still believed to be trapped underground. Energy Minister Taner Yıldız has said the deaths were due to carbon monoxide poisoning.

Çerkezoğlu claimed that work-related accidents had increased following the privatization of the mining sector and called for a public response to the disaster, urging citizens to leave work, wear black and march to the Ministry of Labor offices.

The Confederation of Turkish Trade Unions also declared a day-long strike for Thursday.

Meanwhile, a Turkish human rights group said that the death of more than 1,500 workers between 2012 and 2014 in different industries including mining, highlighted the fact that current working conditions were putting workers' lives at risk.

''Considering the laborers who have lost their lives in heavy and unregulated working conditions, the loss of life cannot be seen as either 'neglect' nor 'accident'," said Ahmet Faruk Ünsal, President of the Association for Human Rights and Solidarity for the Oppressed, known in Turkish as Mazlumder.

''Our relentless greed for profit, in competition with local and global capital, and the working conditions that follow, put the most basic human rights - even the right to life - at risk,'' Ünsal said in a press release.

He also said that if the state failed to inspect working conditions, it would lead to "serious and multi-dimensional" problems - with the Soma mine fire being one example.

Rescue teams were continuing their efforts to reach miners trapped inside the mine, nearly four kilometers away from the entrance, late on Wednesday.

The cause of the fire has not yet been confirmed, but officials believe it may have followed an electrical fault.

Officials from the company which owns the mine, Soma Holding, have described the fire as an ''accident,'' which occurred despite what the company said were high safety precautions and constant supervision.