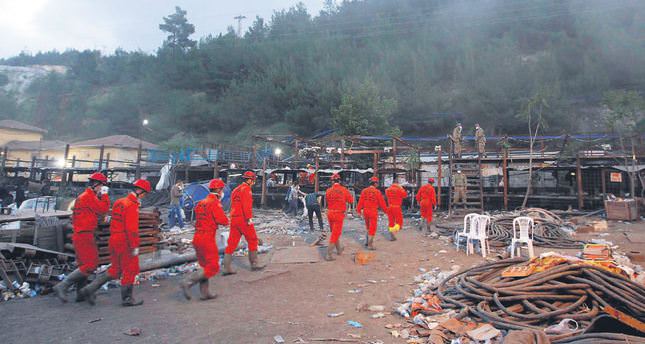 On the third day after a mining accident in the western Turkish town of Soma, the number of casualties rose to 282 with hopes fading for any chance of survival for miners trapped underground though search and rescue efforts continue unabated

ISTANBUL — Officials announced the death toll rose to 283 on the third day after a fire broke out in a mine in Soma, a town in western Turkey. Search and rescue efforts are underway, but as the hours progress, the chances of survival for trapped miners dwindle.

Eight more bodies were recovered from the mine yesterday. It is reported that 150 miners have not been accounted for, though officials did not give the exact number of miners in the mine at the time of the accident that took place during a shift change.

A fire erupted after a power distribution unit exploded in the mine. An investigation was launched to find out the exact cause of the accident. Prime Minister Recep Tayyip Erdoğan has pledged that the disaster would be investigated thoroughly and "no negligence will be ignored." Massive smoke from the mine hampers rescue efforts. The smoke engulfed the entrance of the mine, as a large crowd of families wait to hear from their loved ones.

Another fire broke out in the mine yesterday morning, and workers were unable to discharge water used for extinguishing the fire, and the water inundated some parts of the mine. The fire also interrupted efforts to evacuate carbon monoxide gas inside.

Speaking to reporters about the current situation yesterday morning, Minister of Energy and Natural Resources Taner Yıldız said crews retrieved the corpses of 282 miners in three days. "Autopsies have been performed on all of the bodies recovered from the mine. The bodies of 21 miners were handed to their families after identification, and thus, the number of bodies identified reached 217," he said.
The bodies of miners from other towns were sent to their hometowns. Most miners were from small towns in western Turkey and other cities. The body of Burak Karayel, a mining engineer, was sent to Çankırı, a city in central Turkey. He was buried after funeral prayers yesterday afternoon. Eight graves were dug for eight miners from the same town, Savaştepe, in Balıkesir province north of Soma. Savaştepe is the hometown of 25 miners whose bodies were recovered from the mine.

Eleven miners were buried on Wednesday. Gediz, a town in the province of Kütahya near Manisa, the province where Soma is located, was the hometown of 10 miners who died in the accident. A funeral prayer was held for nine miners yesterday in Gediz, while one miner will be buried in Soma.Yıldız said that in the last 12 hours no miner has been rescued alive. On search and rescue efforts, Yıldız said the number of crews working in the mine has surpassed 500, and it was "an adequate number," adding, "More crews working may cause turmoil inside the mine." "We need to be more careful at this point.

We have two more parts of the mine that have not been accessed by the crews yet," he stated. Minister of Health Mehmet Müezzinoğlu said 27 injured miners were receiving medical treatment at nearby hospitals, and those who are in good health will be released from hospital.

The exact cause of the blast has yet to be officially announced, but it is suspected that an explosion and fire followed an electrical fault.
Yıldız ruled out the possibility of firedamp or a methane gas explosion, saying the deaths were due to carbon monoxide poisoning.
In another statement yesterday afternoon, Yıldız said carbon monoxide levels had decreased in the mine and the fire was gradually dying down. "We will accelerate rescue efforts in the next three to four hours," he stated. Minister Yıldız declined to give the number of miners trapped. "I can only give you the figures I can confirm," he told reporters. "Any figure I say can lead to speculation," he said. On the second day of the accident, Yıldız said 787 miners were trapped but later retracted this statement "out of concern for families awaiting to hear from miners."

Yıldız also stated they would "show no mercy" to anyone who might be responsible for the accident. "If there is negligence, we will hold them responsible, be they from the private sector or public sector," he said. "A criminal and administrative investigation have already started. Our ministry and Ministry of Labor and Social Security are jointly conducting the administrative investigation," Yıldız added. He said that the second, smaller fire which broke out yesterday did not affect the conveyor used to recover miners. "All we think about is the safety of our brothers down there. I am an engineer but I am not here for technical aspects of the accident. I am here for people. By God's will, we will be able to recover all our brothers," he said.

Yıldız also spoke about his previous visit to the mine some nine months ago during which he praised the operation of the mine. "I visit all the mines in Turkey. This is no exception. I visit both mines operated by private sector and by the state. I descended into mines with my brothers, for instance, in New Year's celebrations or in other special occasions and I will continue my visits to the mines," he said. Yıldız also called on the critics not to "politicize" the incident.

Turkey has declared three days of national mourning, during which flags will fly at halfmast and Parliament will be closed for the victims of what is being described as one of the worst mining accidents in the country's history. Mines and stone quarries appear as some of the most dangerous places for Turkish workers, according to government statistics.

More than 3,000 people have died and more than 100,000 have been injured in mining accidents since 1941 in Turkey, figures from the Turkish Statistics Institute (TurkStat) show. Soma, a town in the western province of Manisa with a population of 101,000, has an economy thriving on lignite coal resources. Most miners who perished in the accident were town residents, while some others migrated from nearby towns to work in the mine.
RELATED TOPICS