Historical bridge in Sivas restored to stand the test of time 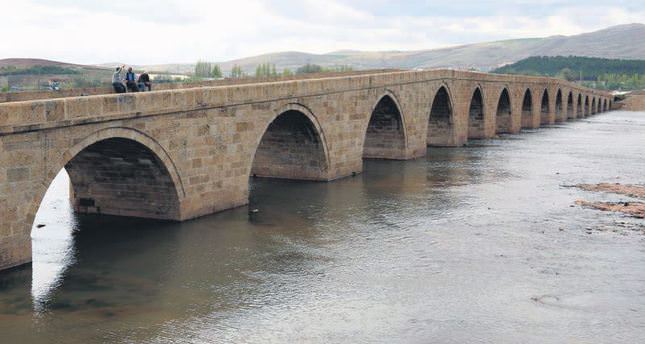 Restoration work is in progress on Kesik Bridge, one of the best examples of Anatolian Seljuk architecture in Sivas

SIVAS — Constructed 722 years ago, the Kesik Bridge has so far stood the test of time with its 19 arches, two of which were covered with soil when the Kızılırmak (Red River), the longest river in Turkey, changed its course. The bridge connects the neighborhoods of Karşıkaya and Esenyurt to 40 villages around the region. The renovation work is to be completed at the end of October. At present, transportation is enabled via another bridge that was erected in 2008.

Aydın Doğan, the director of the 16th Regional Directorate of Highways, indicated Kesik Bridge should be safely transferred to future generations. The bottom parts of the bridge were fortified. As part of the restoration, the sections buried under soil and the original stones will be unearthed without the use of any construction equipment. Once the last two arches are uncovered, they will be connected to the rest of the bridge. "Our principal aim is to introduce such historical pieces to the tourism industry," Doğan said. The renovation of historical bridges takes a long period of time. The Supreme Council of Monuments submits official consent before a project starts. "We are making efforts to protect our historical heritage while avoiding any problems in transportation," he added. Reportedly, heavy vehicles damaged Kesik Bridge. At the end of the project, only small vehicles will be allowed to pass.
Last Update: May 16, 2014 1:36 am
RELATED TOPICS