Only 18 miners left underground in Soma 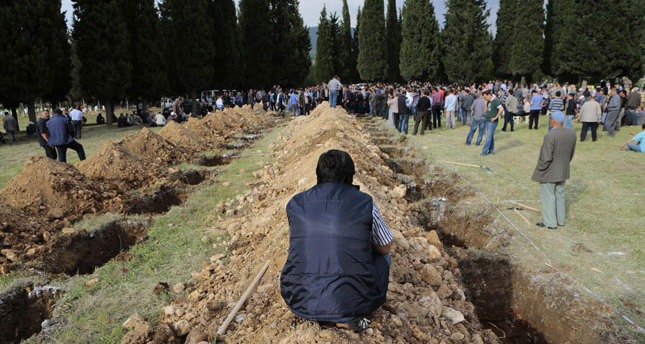 by AA May 16, 2014 12:00 am
MANISA — Only 18 miners remain underground at the Soma mine, the site of Tuesday's disaster in which at least 284 people were killed, Turkey's Energy Minister Taner Yildiz said on Friday.

Yilidiz said his belief was based on the information from the families of miners and documents received from the company operating the Soma coal mine.

Yildiz said a fire still continues to rage underground in the Soma coal mine, but carbon monoxide levels are decreasing.

"It is important that the health of the rescue teams is not under any risk during their operations in the mine," Yildiz said in a press conference in the province of Manisa.

Yildiz said 530 people are participating in the rescue missions in the mine.

He said any negligence on the part of officials or the company managing the mine would be punished. He said 300 people are estimated to have been killed in the accident.

The cause of the blast has yet to be determined, but suspicions center on an explosion and fire which resulted from an electrical problem.

Yildiz earlier ruled out the possibility of firedamp -- a flammable gas found in coal mines -- or a methane gas explosion, saying the miners deaths were due to carbon monoxide poisoning.

Turkey has declared three days of national mourning, during which flags will fly at half-mast and parliament will be closed to honor the victims of what is being described as one of the worst mining accidents in the country's history.

Mines and stone quarries are some of the most dangerous places to work in Turkey, according to government statistics.