Survivors of Soma's mine disaster talk 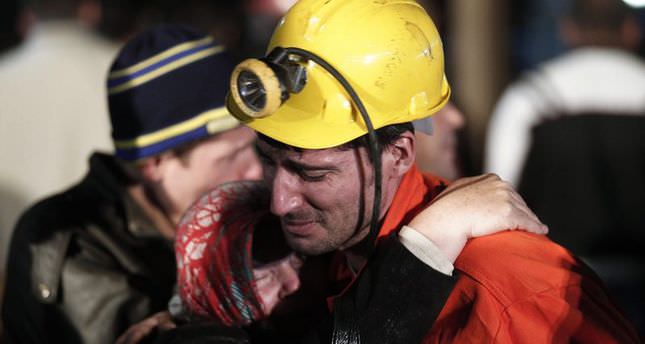 by AA May 16, 2014 12:00 am
BALIKESIR/KUTAHYA, Turkey — Miners who have survived Tuesday's coal mine disaster in Soma, western Turkey, have begun to share their stories inside the mine.

Miner Tevfik Cucu, 31, who was working as a shift supervisor in the Soma coal mine, told Anadolu Agency of his 1km escape.

"Around 5-10 minutes after the technician went to check, we were told to gather everyone and go to "the breath" [fresh air zone]," Cucu said.

"We called everyone together and moved to get out. We were 3km or 4km's away from the entrance and at 1km's distance from the fresh air zone."

"Smoke was everywhere. We put on our masks. People couldn't see each other as they walked. The smoke was diminishing us. We start out with 25-30 people; when we reached 'the breath' there was only an unconscious friend beside me," Cucu said, adding he would never forget his 1km journey inside the mine.

He continued saying "some people grabbed me from behind. Some were praying and others screaming. They said: 'God, someone save me, save me.' I told them to keep their masks, but they didn't. You can't see anything and therefore people were removing their masks. That's why they were affected by the smoke. Most of them died because of this."

Cucu said that he would not return to the mine after the disaster.

Meanwhile, Serkan Sengun, 32, who was rescued 10 hours after the fire broke out, said he was among a group of 130 who went to a fresh air zone after they were warned.

"There was an officer who was a friend of ours. I gave my mask to him because we didn't need it in the fresh air [zone]."

"At that moment, I remembered my children, but I have so many friends who died. I am very sad," he continued.

The country's energy minister, Taner Yildiz, earlier amended the death toll from the disaster to 282.

The exact cause of the blast has yet to be officially announced, but it is suspected that an explosion and fire followed an electrical fault. Yildiz has ruled out the possibility of firedamp or a methane gas explosion, saying most of the deaths were due to carbon monoxide poisoning.

Turkey has declared three days of national mourning, during which flags will fly at half-mast and parliament will be closed for the victims.