Disaster traumatizing for families, survivors and the nation 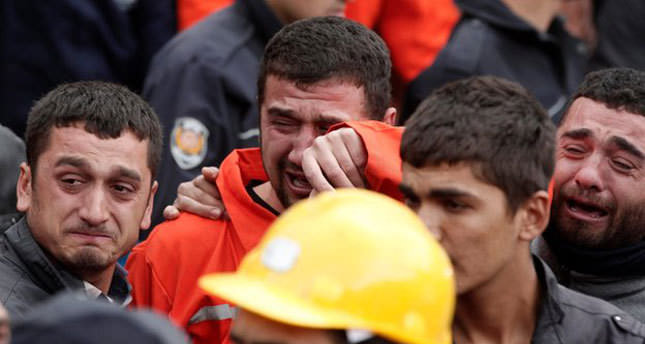 by Burcu Çalık May 17, 2014 12:00 am
MANISA — Images of bodies being carried to the surface has driven the nation to tears. Millions watched and read news reports, anticipating the death toll would be low but as hours passed by, more corpses and less survivors were brought to the surface. United by grief, people prayed for the trapped miners although hopes withered every hour. The grief of miners' families and relatives was particularly unbearable.

Psychiatrists rushed to the site to help counsel the families awaiting news in silence interrupted by occasional sobs and screams of mothers, wives, fathers, brothers, sons and daughters who just identified the bodies of their loved ones. Meriç Ramazan is a psychiatrist leading a team of over 70 colleagues dispatched by the Turkish Red Crescent to help victims' families.

She claimed that the families often tended to deny their suffering. "Everyone here is in a state of shock," Ramazan said. "We try to get them to face the truth. Their response such as anger and stress, is quite normal since this is an ordeal they cannot get over easily. "Some can recover in a short time but a longer treatment might be required for others. It is a great disaster after all." Ramazan, along with 350 psychiatrists from around Turkey appointed by the government, will stay in Soma for the foreseeable future to monitor the situation of those affected. Currently, Ramazan and others provide services to families waiting outside the mine and during the burial of victims. Ramazan notes that their work will be "more challenging" after the families overcame the state of shock. She also commented on the identification method for the bodies.

Computers were set up at a cold storage warehouse where the bodies were kept and families had to identify victims through images of bodies they looked up on screen. "This was the only available method (due to high number of bodies) but unfortunately, it will add to the trauma. It is a serious problem that they had to see other corpses as well while looking for their next of kin," Ramazan said. The Psychiatric Association of Turkey (TPD) issued a report on the effect of the mine disaster.

The report also advises observation of miners who were not in the mine at the time of the accident who may experience adverse effects such as aversion from people, fear and other conditions. "Along with this group of people, it is obvious that the entire population will be affected, especially due to the TV broadcast of reports related to the accident. Therefore avoiding misinformation and correctly informing people about access to medical facilities for any necessary psychiatric support and restoring a sense of justice bears importance.
People should be informed properly about the search and rescue efforts and investigation of the accident," the report reads.
RELATED TOPICS