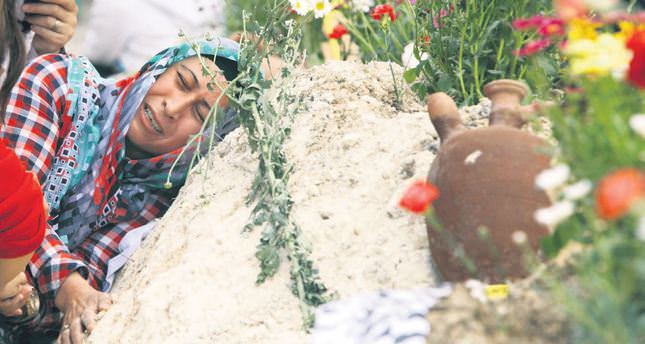 by Anadolu Agency May 17, 2014 12:00 am
MANISA — Hundreds of funerals have been taking place all around the country since the coal mine accident in Soma on Tuesday. With most of those who died being Soma locals, crying hasn't stopped for the past few days at the allocated space in Soma's cemetery.

Supervising the operations to rescue the trapped miners, Yıldız updated reporters on the situation. Referring to the miners as "brothers," Yıldız said, "Only 18 brothers are inside and this figure is based on the number of workers the company running the mine gave us and information provided by families. This number may very well drop to 16."

He stated that 19 families had applied to officials for the rescue of their relatives. "We predict that some miners who left the mine after their shift ended went back to the mine to rescue their colleagues. In the end, the number of casualties will be 302 at most," he said, adding that search and rescue operations will continue throughout the day. "By God's will, the number of casualties will be lower than we expected."

Yıldız said the government avoided stating the exact number of people who were in the mine at the time of the accident "to prevent speculation." "This is a sensitive matter," he said. "There have been reports speculating the death toll on social media and in media outlets. That is why we did not inform you about the number of people in the mine. I am disappointed that some people are in a race to increase the number of casualties," he added.

At a press conference on Friday, officials from the company operating the mine told reporters that 787 miners were in the mine at the time of the accident and 363 miners had been recovered. The company also noted that the number of injured was 144, of which 122 were miners and 22 were rescue workers.

According to the minister, the crews inside the mine were also working to reinforce the ceiling. "Wooden and steel parts burnt and melted during the fire and the reinforcement is needed for crews to advance without danger," he said, noting that carbon monoxide levels in the mine had dropped further. "The fire is still burning but it started to die down. It will take time to extinguish it completely," he said, adding that the health of rescue crews had to be taken into consideration during the efforts to recover the trapped miners.

While 530 people were working on the search and rescue operation, Yıldız explained that it was impossible to send them in together. Teams of three or seven were taking turns combing the mine. Noting that the number of rescue workers was adequate, the minister said, "We gladly accepted their assistance but some crews have no experience in mining accidents."

Reiterating his remarks on Thursday about the investigation into the accident, Yıldız said, "We cannot allow investigators into the mine at this point but rest assured that a criminal and an administrative inquiry were launched. There will be consequences. We lost nearly 300 of our brethren and we will not tolerate any mistake."

The cause of the blast which led to the fire in the mine has yet to be determined, but suspicions center on an electrical problem. Yıldız earlier ruled out the possibility of firedamp - a flammable gas found in coal mines - or a methane gas explosion, saying the miners' deaths were due to carbon monoxide poisoning.

According to the officials, search and rescue crews are expected to reach two previously inaccessible galleries in the mine on Friday as the intensity of the fire blocking of the galleries had been reduced. The fire knocked out power and shut down the ventilation shafts in the mine. The crews had pumped oxygen into the mine but it was too late as noxious fumes had already quickly spread throughout the site and killed miners.

Friday also saw more funerals for the deceased. Most miners were laid to rest in mass burials on Thursday in their hometowns in the western regions of Turkey. allocated space in Soma's cemetery.