8 arrested in connection with Soma mine disaster as investigation deepens 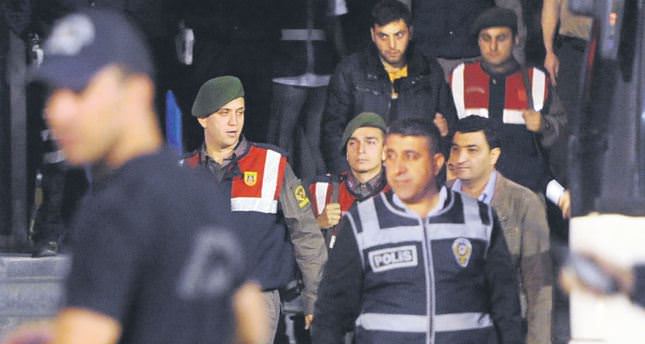 Police are questioning many executives including the acting chairman of Soma Holding, Can Gürkan, and at least eight senior personnel have been arrested

ISTANBUL — Another two suspects were arrested yesterday in connection with the deadly mining accident last week in the western Turkish town of Soma, bringing the number of arrests in two days to eight.

There are other suspects linked to the accident that claimed 301 lives who are not currently in custody but are being questioned. On Sunday, 16 people were detained for interrogation including the company's top executives. The prosecutor's office said 16 people were detained while three others were released after questioning with eight suspects released on probation.

Eight suspects are being interrogated including the top executive of the company running the mine. The operations manager of the mine, Akın Çelik, who was one of the Soma Holding officials briefing reporters, was among the arrested suspects." There was no negligence on our side. I have worked in mines for 20 years and I have not witnessed such an incident," Çelik said at a press conference days before his arrest.

Along with Çelik, engineers Yalçın Erdoğan and Ertan Ersoy and security official Yasin Kurnaz were arrested on Sunday, while Hilmi Kazık, a shift supervisor, was arrested yesterday. They are imprisoned and awaiting the first hearing of the trial. Fifteen others including deputy manager of the mine Ali Uluğ and security official Selçuk Demirci were released on probation while five suspects are being questioned.

Can Gürkan, son of Soma Holding CEO Alp Gürkan and acting chairman of Soma Holding which operates the mine, is among the detainees who are being questioned. As he was brought to the courthouse, Gürkan said, "I will speak when the time comes." The prosecutor asked the court to release Gürkan on probation.

His father Alp Gürkan, who faces criticism for disappearing after the accident, is not in detention according to a written statement by the company. Alp Gürkan, flanked by Akın Çelik and other company officials held a press conference last week in Soma and denied negligence in the accident which killed 301 miners.

As of press time, Ramazan Doğru, general manager of the mine was taken into custody. Özgür Özel, a lawmaker from the opposition Republican People's Party (CHP) revealed after meeting with the detainees that lawyers in Soma did not take the case, finding it "unethical" and Soma Holding did not appoint lawyers for the suspects. The arrested suspects face charges of causing multiple deaths and injuries through negligence. Speaking at a press conference, Bekir Şahiner, chief prosecutor for Manisa's Akhisar district which is coordinating the investigation, said some suspects were released after their interrogation while the prosecutors will decide whether to charge or release the others. Şahiner said the investigation was rapidly progressing and they took every measure to ensure a fair trial.
Causing death through negligence carries a sentence of three to 15 years.

Speaking to the media, some miners claimed the mine had been "extraordinarily hot" in recent days and small fires occasionally erupted causing minor collapses. They claimed the mine officials did not take measures despite the fires and collapses. A miner said their supervisors used to shut down the areas in the mine where fires broke out. Other miners claimed new ventilation shafts were built instead of new tunnels for rapid evacuation in the case of a fire.

Turkish media reported that the prosecutors showed suspects the initial expert report on the cause of the accident as well as eyewitness accounts and asked why they did not halt the production in the mine despite the high temperature caused by smoldering coals. Suspects reportedly responded that they were not authorized to halt the production.

Speaking to Turkish media, job safety specialist Muharrem Demirbilek said the main reason for the disaster was the negligence and undermining of basic security measures. "Despite the steady increase of temperature for last 10 days in the mine, no measures taken against it," stated Demirbilek. He confirmed that the negligence caused mine disaster.

A group of lawyers representing Soma Holding were in front of the courthouse in Soma to make a press statement. A lawyer claimed the carbon monoxide levels in the mine were normal on the day of the accident. A group of angry locals confronted the lawyers after the statement was made.

A local asked lawyers, "Who are you defending? The 300 people we lost or the company?"

Upon protest, lawyers left without making a statement while riot police in the area called on protesters to calm down. In the past seven decades, 3,000 people were killed in mining accidents in Turkey but executives of the mining companies often escaped punishment for negligence due to loopholes in the penal code. Amendments to laws in the past 10 years brought prison terms for mine owners and executives but since the accidents are viewed as occupational accidents, no lengthy sentences are handed down to the companies except in cases where the charges are reckless killing through negligence. Lawsuits on mining accidents resulted in payment of compensation to the families of miners.

Following the privatization of state-run mines starting from 2004, tougher sentences were considered for accidents, but again, the lawsuits concluded with courts ruling for compensation to victims and mine operators being handed low prison terms. For instance, a firedamp explosion in a coal mine in 2009 killed 19 miners in the northwestern Turkish province of Bursa. The mine's owner and executives were sentenced to five and six years, respectively.

Another mining accident in the province of Balıkesir killed 14 in 2010. The mining company's partners and engineers were arrested but a report by an expert appointed by the court did not find fault on company's part, and defendants were subsequently released. Another case was in Edirne, a northwestern city where, in 2010, three miners trapped in a mine following a collapse were killed. Welding work in the mine triggered a blaze that caused the collapse. The court found the mine owner, welder and two others guilty of reckless killing. The mine owner was sentenced to five years while the welder and others were sentenced to various prison terms later commuted to fines. The Turkish Supreme Court recently upheld the ruling the defendants objected to, setting a precedent for similar cases such as the Soma accident. The family of one of the miners also won compensation from the defendants after a local court found the employer negligent in the workers' safety.
Last Update: May 20, 2014 2:09 am
RELATED TOPICS