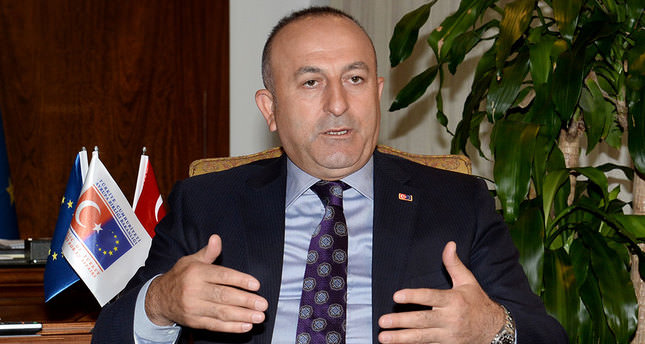 by AA May 20, 2014 12:00 am
ANKARA — Turkey's EU Minister Mevlüt Çavuşoğlu has said a planned visit by Prime Minister Recep Tayyip Erdoğan to Germany on Saturday will not be cancelled despite "rhetorical and populist criticisms."

Çavuşoğlu was answering journalists' questions Tuesday during a visit to Ankara by Stefano Manservisi, newly appointed EU ambassador to Turkey.

When asked about criticism of Erdoğan's visit to Germany to address Turkish-origin citizens, Çavuşoğlu said that Turkish people were being asked to integrate and contribute to their host countries.

"We did not understand why German politicians and media were irritated with our Prime Minister's visit," Çavuşoğlu said. "The binding comments for us are the ones by the German government; therefore we did not approve the rhetorical and populist criticisms."

Erdoğan will address Turkish-origin citizens in a country where three million Turks or people of Turkish descent live, with a visit to the western city of Cologne on May 24.

Meanwhile, Stefano Manservisi explained that the keyword during his tenure will be "constant dialogue."

"I am personally motivated to build on what has already been done between Turkey and the EU," said Manservisi. "We call it accession, but we call it also friendship and strong partnership."

Manservisi also offered his condolences to the victims' families of the Soma mining disaster that claimed a total of 301 lives.

The EU's Turkey mission has been without an ambassador since former envoy Jean-Maurice Ripert left his post after a call from France's President Francois Hollande to become ambassador to Russia.