Whitewashing not an option in Soma investigations 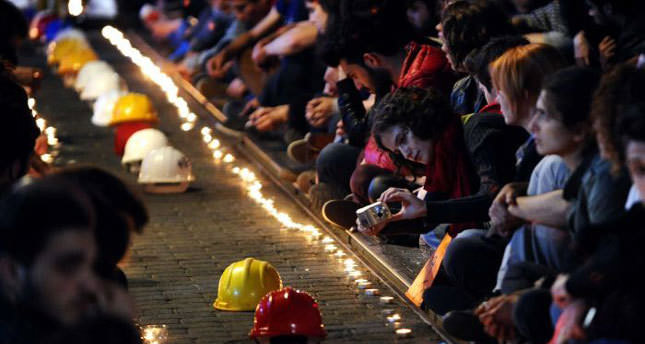 by May 20, 2014 12:00 am
ANKARA — Turkey has charged three more people with manslaughter over the country's worst mining disaster, including the CEO of the company operating the pit, reports said on Tuesday.

Can Gurkan, the chief executive of mining company Soma Komur, general manager Ramazan Dogru and a technician were the latest to face manslaughter charges over the disaster that claimed 301 lives, the private NTV television said. A total of eight officials from Soma Komur have now been charged over last Tuesday's accident at the Soma mine. The private Dogan news agency reported that police were also looking for the owner of the firm's mother company Soma Holding, Alp Gurkan, for questioning.

Prime Minister Recep Tayyip Erdoğan vowed Tuesday the accident would not be covered up and would be thoroughly investigated. "The judicial probe will be launched. We will be monitoring it. Whoever is responsible will be brought to justice," he told his ruling party lawmakers in parliament.

Kemal Kilicdaroglu, the leader of the main opposition Republican People's Party (CHP), called for a minute of silence during his address to a group meeting of his party's lawmakers. He then read out the names of every miner killed in the Soma accident. "This is a day of mourning for all of us," he said.

Turkey's parliament convened on Tuesday to debate the disaster. The lead prosecutor in the probe, Bekir Sahiner, on Sunday ruled out that an electrical fault had triggered the fire that spread through the mine. Rescue operations were suspended on Saturday as information from families suggested that all the bodies had been recovered.