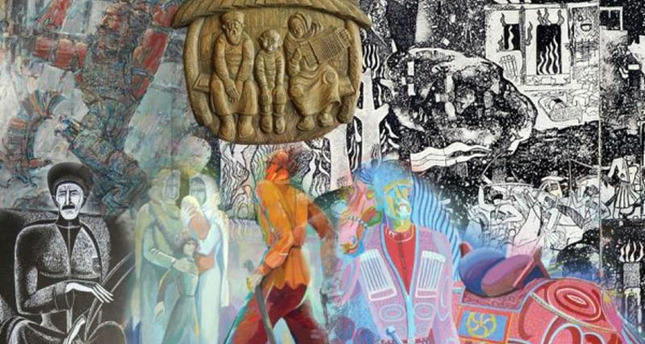 by AA May 22, 2014 12:00 am
ISTANBUL — Circassian photographer Serina Haratoka Tara's first personal exhibition "Kabardino-Balkar and Circassians" focuses on the exile of the Circassian people and the landscape.

The "Kabardino-Balkar and Circassians" exhibition has opened its doors at the Feriye Restaurant on Çırağan Street. Marking the 150th year of the Circassian exile, the exhibition features photographs of the landscape, streets and locals of the Kabardino-Balkar
Republic with a glimpse of traditional clothes, dance and music. The exhibition was organized by curator Çağla Cabaoğlu and is open to the public until May 29.

Speaking to an AA reporter, Tara said her Muslim ancestors were exiled by Russians to Anatolia after the Caucasus-Russo War. Some of Tara's family migrated to Jordan. Although devoted to their traditions, the Circassians had the chance to learn about different ethnic identities along the way.

Tara is interested in taking and sharing photos by delving into the depths of ethnic identities, traditions and customs. "My principal aim is to show the homeland of the Circassians who were unable to visit. I believe it is a big social responsibility to remember the Circassians and promote our cultural richness in Turkey, our second homeland," she said. The experienced photographer is interested in carrying out different projects by following the traces of nearly extinct cultures.

A significant part of the exhibition consists of landscape photos displaying the regions of Mount Elbrus and the Baksan, Chegem and Cherek Rivers. Among the Circassians, music and dance are another way to express sorrow and joy. "It was very enjoyable to witness their enthusiasm. I found one of my distant relatives at the bazaar. I tasted interesting foods and watched Russians, Circassians and the people of Balkar," she added. Her exhibition also presents photos from famous Kabardinian artist Ruslan Tsyrm and traditional clothes designed by Medina Saralp.

Tara underlined that many people are unaware of the Circassian exile, adding "the Circassians are hard people. Our cultural life makes it difficult for us to fight for our rights and express our feelings," she said. Tara further noted that they have a strong sense of belonging and are therefore not sufficiently understood by Turkish people.