Erdoğan: No details will be overlooked in Soma disaster 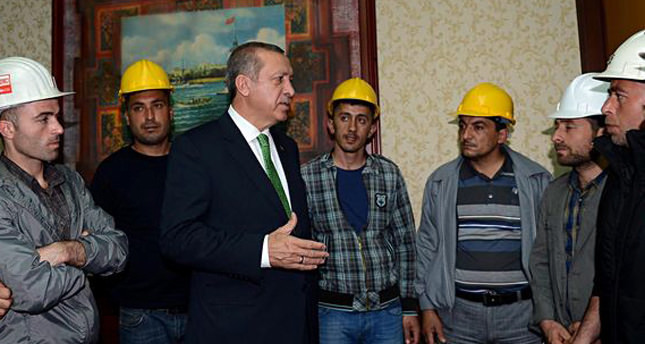 ANKARA — Turkey's Prime Minister Recep Tayyip Erdoğan said on Thursday that "no details will be overlooked" in investigations into the Soma mine explosion that killed more than 300 people in western Turkey.

Erdoğan said anyone found negligent by the administrative and criminal investigations would be held accountable and all families of victims would be compensated.

Speaking at a meeting of the Turkish Union of Chambers and Stock Exchanges Thursday, Erdoğan thanked Turkey's businessmen for their support after the mine disaster and lauded their contributions to the country's economic growth.

"Even if no country in the world succeeds in totally preventing the work place accidents, we will keep on trying to be perfect in this regard," said Erdoğan. "Dignified Turkish nation stood firm and united after all disasters as it has done after the Soma coal mine disaster."

He also spoke about recent political turmoil in Turkey, which he linked to the country's economic health.

"The attacks on our government with the incidents of Gezi Park protests and the 17 December coup attempt resemble the incidents of Egypt and Ukraine. Protests targeting our economy and national freedom will not be permitted or tolerated because they harm wellbeing of 77 million people of Turkey", said Erdoğan.

He added that after Turkey's first democratic presidential elections on August 10, the result "will have to be respected by all."

Turkey's president was previously elected by Turkish Parliament until the Turkish voters chose to elect their president themselves in a 2007 referendum.