Calls against provocations after Istanbul riots 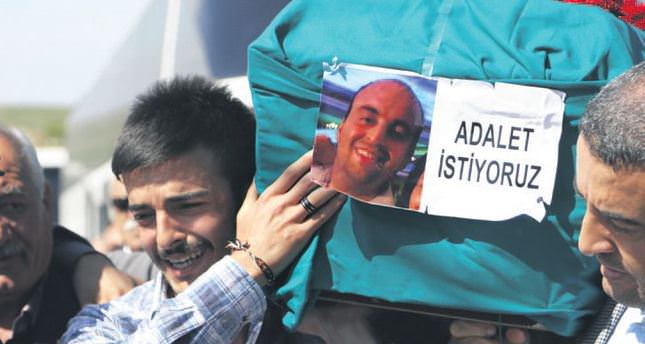 by Daily Sabah May 26, 2014 12:00 am
ISTANBUL — Riots in Istanbul's Okmeydanı district on Thursday killed two innocent passersby and prompted fears that they may trigger Sunni-Alevi strife in the country, as one of the victims was a member of the Alevi sect. Government officials condemned the riots and said the killing aimed to incite conflict between Sunnis and Alevis.

Uğur Kurt, 30, was heading to a funeral at a cemevi, an Alevi prayer house, in Okmeydanı when a bullet hit him in the head. Kurt's death was quickly blamed on police officers that were firing into the air to disperse rioters critical of the government. An investigation is ongoing, and the guns of eight police officers are being examined. The death of an Alevi citizen in front of a cemevi stirred up rage in the predominantly Alevi district of Okmeydanı. An angry mob attacked a police officer investigating the scene, while locals complained the prosecutor was late to investigate the incident.

Several Alevi organizations staged demonstrations in various cities yesterday against "hostility" toward the Alevi community and condemned the killing of Uğur Kurt.

Speaking to the Star daily, Ali İhsan Şahin, head of an Alevi nongovernmental organization, said the Okmeydanı riots sought to provoke Alevi-Sunni strife through protests similar to the ones in Gezi Park last year. "Some Alevi organizations keep fuelling the fire instead of calling on people to calm down. Alevi children, Alevi youth are the tools of those plotting chaos.

They did the same to Kurds, but Turkey has now made peace with Kurds. Now they turn to Alevis to create new strife," he said. Şahin said although a number of Alevi organizations called on their members to not become involved in such incidents, some others helped to sow the seeds of discord. "They are the same groups that were involved in street riots before the 1980 coup.

They are only Alevi by name, but they have nothing to do with faith," he said. Şahin said those so-called Alevi organizations and their co-conspirators wanted police to kill Alevis to incite chaos. "I spoke to Alevi dedes (community leaders), and they told me they are not allowed in Okmeydanı because they urged people to calm down," he said.

Images of masked men wielding shotguns and pistols and roaming in the Okmeydanı district that emerged a day after Kurt's death corroborates reports that a plot is afoot to provoke a sectarian conflict.

Those men are accused of being members of the Revolutionary People's Liberation Party-Front (DHKP-C), a terrorist organization renowned for exploiting protests to carry out attacks against law enforcement officials.

In an apparent response to calls for standing against provocation, Kurt's family reacted to protesters present at the young man's funeral in his hometown Sivas in eastern Turkey. As mourners gathered in a village for the funeral, a group of demonstrators calling themselves the Sivas Democracy Platform chanted slogans against the government. Some of Kurt's family members shouted at them: "We lost Uğur because of riots. We don't want you here."

In a related development, Prime Minister Recep Tayyip Erdoğan called Kurt's father, Kemal Kurt, and extended his condolences to the grieving family. The prime minister pledged that they would meticulously investigate the killing and find those responsible for the shooting. Kemal Kurt thanked Erdoğan and expressed his hope for a thorough inquiry into the incident.

The Okmeydanı riots started when a group gathered for protests allegedly over the Soma mining accident last week and the death of a Gezi Park protester. The protest quickly escalated into an all-out turmoil when rioters wearing masks emerged and started hurling stones and Molotov cocktails at riot police deployed in the area to disperse the unauthorized rally. Along with Uğur Kurt, Ayhan Yılmaz, a bystander, was killed when rioters linked to terrorist organizations tossed a fragmentation grenade at police.
RELATED TOPICS