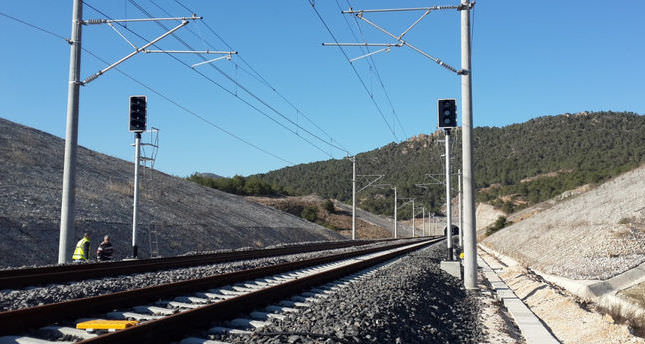 ANKARA — A chain of attacks has delayed the opening of the much-anticipated high-speed train, that will run across Turkey, by nearly a month.

Turkish Minister of Transportation, Maritime Affairs and Telecommunications Lütfi Elvan said yesterday that there have been 200 sabotage incidents targeting the signalization system and communication cables and another 70 incidents targeting railway connection over the past couple of weeks. Elvan stated the sabotage attempts dealt a blow to the testing of the high-speed train and other processes, noting that they led to a delay in the commencement of the anticipated services.

The sabotage targeted the railway where the train will operate on, between the capital Ankara and Istanbul. Originally scheduled for opening in May, the services were further delayed to the second half of June, according to Elvan.

Elvan told reporters an investigation was underway but no suspect was detained yet in connection to attacks. He said the attacks were sophisticated as it was impossible to cut off the cables with simple tools. "Suspects also left the cables they cut off in their place and this confirms it is a sabotage attempt (unlike a petty cable theft)," he said. Speaking yesterday at an event, Elvan said the railroad had concrete, enclosed canals on its two sides to house the signalization system and those canals had hefty hatches that cannot be opened easily.

"Saboteurs were able to open them and cut off the thick cables, presumably with heavy industrial tools designed for that purpose," he said. Elvan noted security forces stepped up protection measures on the railroad following the incidents. "Repair work is underway. Cables are being replaced and we will finish it as soon possible," he said.

High-speed train infrastructure was subject to cable thefts in the past and so far, a total of 20 kilometers of cables were stolen but these thefts are attributed to petty criminals whereas the latest attacks are named sabotage. Several suspects were captured in February following similar attacks and officials supplied electricity to the cables to prevent sabotage attempts. A saboteur died of injuries when he touched the electric cable.