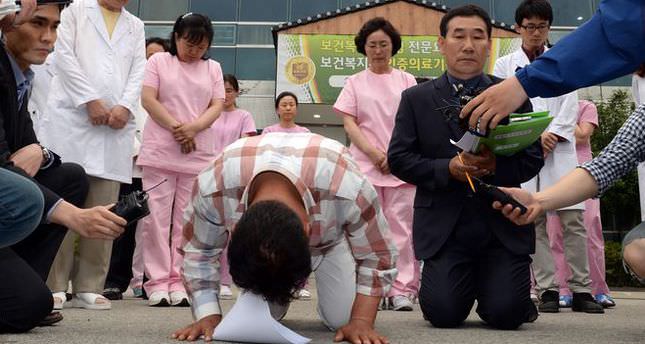 by Associated Press May 28, 2014 12:00 am
SEOUL, South Korea — Twenty-one people suffocated and seven people were injured Wednesday in a fire at a hospital in southern South Korea that specializes in patients suffering from dementia and palsy, officials said.

One patient at the Hyosarang Hospital in Jangseong County, an 81-year-old man suffering from dementia, was detained in an investigation after security video footage showed him entering an area where the blaze began, police said. Police declined to provide further details, saying the cause of the fire was still being investigated.

Jangseong Fire Department officials said 20 patients and one nurse were killed and that seven people were injured, adding that the victims suffocated. They spoke on condition of anonymity because of office rules.

Kim Jeong-bae, one of the firefighters who entered the building, said none of the bodies that he and his colleagues retrieved were burned and that they apparently were already dead when firefighters entered the hospital while it was engulfed in black smoke.

There were 34 patients and a nurse on duty on the second floor of an annex of Hyosarang Hospital when the fire broke out, officials said. More than 270 fire officers put the fire out after about six minutes, the officials said.

Officials said that 45 people, including a nurse, were on the hospital's first floor but that they all escaped.

South Korean media including Yonhap news agency earlier had reported some of the dead had their hands bound to their beds without citing any source for the information. Fire officials later Wednesday said that report was inaccurate.

Kim, the fire officer, said all the dead bodies he saw were found on beds or on the floor but none of them had their hands bound. He said the second-floor windows are barred. Two hospital officials, speaking on condition of anonymity because they weren't authorized to talk to the media, also said that patients were not bound to beds.

The fire comes as South Korea debates long-ignored safety lapses and a history of corner-cutting in a country that rapidly rose from poverty and the destruction of the 1950-53 Korean War to become Asia's fourth biggest economy.

Officials are still searching for more than a dozen bodies from a ferry sinking last month that left more than 300 people dead or missing, most of them high school students. South Korea has also had two subway accidents in recent weeks. And a fire earlier this week at a bus terminal near Seoul killed eight people and injured 57.