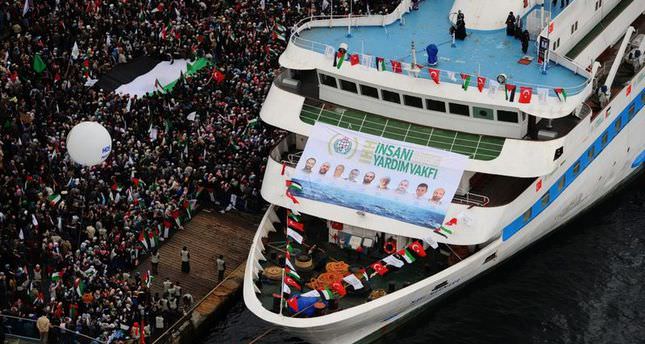 by AA May 28, 2014 12:00 am
ANKARA — The Turkish government has no power to stop a public trial process against the Israeli government by the families of the ten Turkish citizens who died during the 2010 Mavi Marmara raid, said Prime Minister Recep Tayyip Erdogan on Tuesday.

Erdogan, however, emphased that ongoing state negotiations with Israel for compensation for the families should be accepted as a separate issue.

On Monday, a Turkish court ordered the arrest of four Israeli officials on who authorized and ordered the raid, and an Interpol red notice was issued for the officials, who neither attended the trial nor responded to the summons sent for them.

The Mavi Marmara flotilla, organized by the Free Gaza Movement and the Turkish Foundation for Human Rights and Freedoms and Humanitarian Relief (IHH), was carrying humanitarian aid and construction materials, with the intention of breaking the Israeli blockade of the Gaza Strip when it was stormed during an Israeli commando raid.

The attack in 2010 led to international outrage and soured Turkish-Israeli ties. Last year, obligated by the U.S., Israeli Prime Minister Benjamin Netanyahu offered an apology to Turkey during a phone conversation with Erdogan.

"We already stated that these trials started by families of the martyrs and survivors of Mavi Marmaraincident are not under our initiative, so we do not have any right to intervene. Stating that beforehand, we started negotiations," Erdogan said.