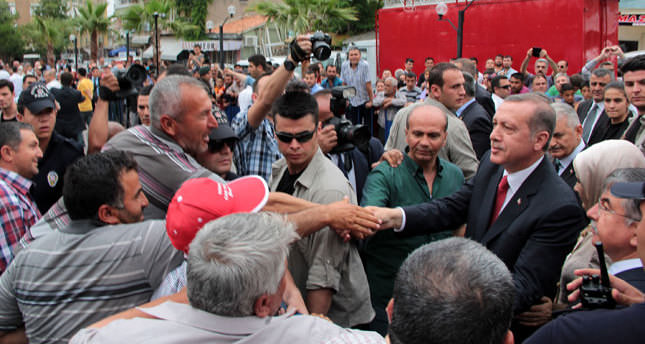 by Daily Sabah May 29, 2014 12:00 am
İZMİR — Prime Minister Recep Tayyip Erdoğan, who was in the western Turkish city of İzmir to attend a military exercise yesterday, paid an unannounced visit to the families of miners who died in the Soma mining accident earlier this month. Erdoğan met the families in İzmir's Kınık district where a large number of the families of the perished miners reside. Erdoğan was accompanied by his wife and had lunch with families at a state-run guesthouse in Kınık.

He held a closed two-hour meeting with them regarding their problems in the aftermath of the tragedy. According to media reports, verses from the Koran were recited at the meeting in memory of the mine victims. Erdoğan reportedly held private conversations with each family, wrote down their demands and pledged to the families that their needs would be addressed. As Erdoğan left the guesthouse for a meeting with the Kınık mayor, a miner approached the prime minister and requested him to lift the practice of subcontracting in the mines. Subcontracting is among the major woes of miners as mining companies employ subcontractors for cheap labor. Fifty-one miners from Kınık died in the mining disaster. Eleven of them were from Elmadere, a village of Kınık and media reports claimed the government did not extend assistance to families of miners in the village as it is populated by members of the Alevi sect. The government denied the allegations. Minister of Family and Social Policies Ayşenur İslam stated that villagers themselves declined talks over assistance as they were in a mourning period and later contacted authorities for talks. She said the families of miners from the village were later provided assistance.
Last Update: May 29, 2014 10:20 pm
RELATED TOPICS