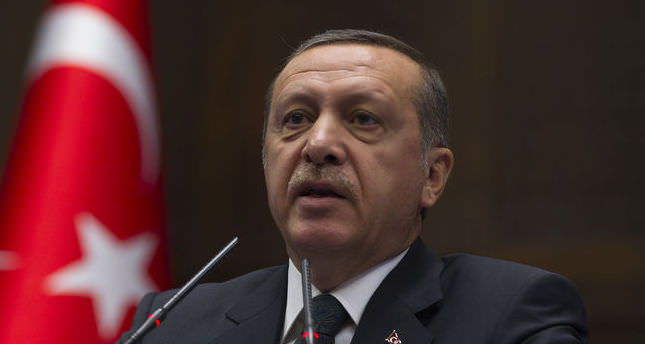 by Anadolu Agency May 29, 2014 12:00 am
AĞRI — Demonstrators have blocked a highway in southeast Turkey and seized a soldier, exposing the fragility of a reconciliation process which Prime Minister Tayyip Erdoğan launched with PKK leader Abdullah Öcalan in 2012 to try to end a three-decade insurgency which has killed 40,000 people, a move long unthinkable in the face of strong nationalist opposition.

"You have stuck up for the reconciliation process. I believe you will not allow the process to be sabotaged," Erdoğan told thousands of his AK Party supporters in the eastern and predominantly Kurdish province of Ağrı, near the Iranian border, on Wednesday.

"Those who feed on blood and chaos will try and spoil the process."

Outlawed Kurdistan Workers Party (PKK) militants abducted the army sergeant on Tuesday after setting fire to his car at a roadblock they built between Diyarbakır and Bingöl provinces, prompting a military operation to rescue him, security sources said.
The militants have blocked various points along the highway with trucks and cars seized over the past four days in protest at the construction of several military outposts.

Security forces briefly reopened the road on Tuesday evening after sporadic clashes, but had to close it again as the protesters used excavators to dig parts of it up.

The PKK took up arms against Turkey in 1984 with the aim of carving out a separate state in the southeast for the country's Kurds, which make up around 20 percent of the population but have long been denied basic political and cultural rights.

PM Erdoğan has staked considerable political capital in peace efforts, widening cultural and language rights at the risk of alienating parts of his grass roots support base.

A ceasefire called by the militant leader in March 2013 has largely held, but the PKK halted a rebel withdrawal to bases in northern Iraq last summer, complaining at a lack of progress in the process. There has been sporadic violence in recent months.