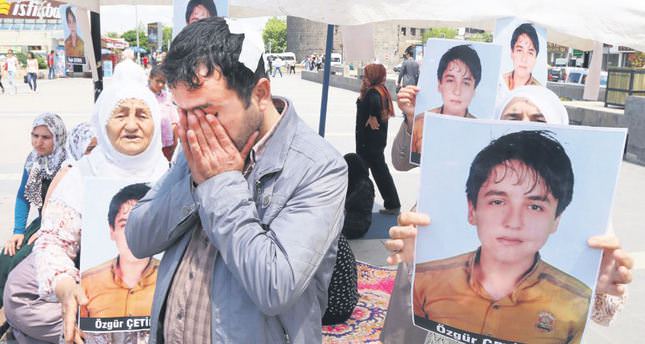 Dozens of families in Diyarbakır stage a protest, calling on the PKK to release their kidnapped children, pressuring local leaders of the pro-Kurdish BDP to intervene

DIYARBAKIR — Outcry from a group of Kurdish mothers in the southeastern Turkish city of Diyarbakır over their children's purportedly forced recruitment by the PKK found support from other families who joined their sit-in protest. In support of the families, the Turkish government has now joined in and is urging the PKK to release the children.

Safiye Gündüz and Mahfuze Eren, mothers of 15-year-old Halime and Fırat Aydın, respectively, started their sit-in outside Diyarbakır's city hall on May 20.

The three women were later joined by eight other mothers, who all prayed for the return of their children and appealed to authorities to intervene and free their "abducted" children. Halime and Fırat Aydın, two high school students, were on a picnic with other students in Diyarbakır's Lice district, organized by a local nongovernmental organization (NGO) on April 23. They went missing, along with 25 other students.

Their parents claimed that the NGO, called Megam-Der, is associated with the terrorist organization PKK and used the picnic to recruit members for the group. Some children have returned since, although after their families called for their return.

Gündüz and Eren were inspired by those protests and soon, they were joined by Emine Temel, another Kurdish mother whose 15-year-old son Hatip went missing after attending a pro-PKK rally in the southeastern city of Şanlıurfa. They all claimed their sons and daughters were "persuaded" by PKK militants to go with them to PKK camps in northern Iraq where militants undergo training to stage terror attacks.
Children who had been taken and later released claim they were tricked by the PKK into joining the armed group. For instance, the 19-year-old son of Meral Çapa was attending a university in Diyarbakır when he joined the PKK. Çapa claims her son was "brainwashed." A 21-year-old unemployed woman whose mother was among the protesters, was pledged "a job" by people linked to the PKK. The women's protests encouraged others to follow the example. Özgür Çetiner, a high school student, and his cousin Berat Çetiner who works at a barber's shop, were taken "to the mountains," a name commonly attributed to the PKK hideouts in the rugged territories of the southeastern Turkey and northern Iraq. Holding photos of two 15-year-olds, their families sought to enter the offices of Peace and Democracy Party (BDP), a political party known for its ties to the PKK on Tuesday. Families wanted to hold talks with BDP officials in Diyarbakır but a scuffle reportedly broke out between the BDP officials and families, slightly injuring family members. Families claiming two children were kidnapped staged a sit-in in another neighborhood of Diyarbakır.

Some protesters avoided cameras and declined to give their names for fear of the PKK, which boasts a major following in predominantly Kurdish Diyarbakır. Others, however, braved the risk of attacks by the PKK in a rare open display of dissent against the terrorist organization.

As the protests made headlines, websites affiliated with the PKK released a statement and denied the children were abducted. The statement claimed the youth volunteered to join their ranks but they declined, citing the limit for the age of recruits. Militants said some children were sent back to their families while others "under risk" were kept for "non-combat training." "The risk" they refer is detention of Kurdish youth by security forces. "It is well known that [Turkey] imprisoned many of our children where they are abused," the statement read.

Speaking to Daily Sabah, Ahmet Faruk Ünsal, president of Association for Human Rights and Solidarity For The Oppressed (MAZLUMDER), a leading nongovernmental organization, noted that it was still not exactly clear whether the youth volunteered to join the organization or they were forced to enroll but any individual below the age of 18 is deemed a child both under international law and Turkish law. "Keeping children away from any kind of conflict is a universal responsibility.

The PKK has announced that the Geneva Call's commitments are binding for them since they signed it and Geneva Call [requires] the protection of children in any conflict. So, PKK should adhere to it. Even if those children volunteered, what PKK should do is to return them to their families," Ünsal said. Geneva Call, an international nongovernmental organization signed a deed of commitment with the PKK in October 2013 to protect children from armed conflict. The deed defines persons under the age of 18 as children and acknowledges international laws criminalizing use of children in armed conflicts. The PKK has pledged to keep people under 18 away from "combat zones."

The families' outrage has also caught the eye of Prime Minister Recep Tayyip Erdoğan. The Ministry of Family and Social Policies held talks with families and Minister Ayşenur İslam told Anadolu Agency that they were worried about the families' ordeal at a time of reconciliation in the region, referring to the peace process the government initiated to end PKK terrorism and restore rights of oft-neglected Kurdish community.

İslam said it was "a crime against humanity" to give weapons to children to fight. She promised that her ministry will give any necessary support to the families.

Turkish security forces are also on alert to locate the children though it is suspected that the children were brought to Kandil, a mountain in the northern Iraq where the PKK has hideouts. A chief prosecutor in Diyarbakir launched an extensive investigation to find the children.
Speaking to Anadolu Agency (AA) on the issue, Mihrimah Belma Satır, a lawmaker from the ruling AK Party, said it was the first time that people stood against the PKK in Diyarbakır. "This shows that people in Turkey embrace the reconciliation process," she said. For years, Turkey's southeastern and eastern regions have been bastions of the PKK's bloody campaign which has killed over 30,000 people. In 2012, the government launched a reconciliation process and passed a series of reforms to end the decades-old conflict and restore rights to Kurds. The terrorist organization declared a de facto ceasefire after the reconciliation process took hold and Turkey has not been targeted by any significant terror attacks following the truce.

Nevertheless, in the past months, the organization has stepped up its activities again, kidnapping people in the eastern and southeastern cities and firing on security forces.

Satır said deceiving children into joining PKK went against the reconciliation process. "Thanks to the process, the killings have been halted. We have been trying to convince those in the mountains to stop attacks. Yet, they are seeking new recruits and moreover, those recruits are children," she said. She stated that the sit-in by families was "meaningful as it showed people in the region embraced the reconciliation process and support it. We hope those children will reunite with their families." Satır added that she believed more protests will emerge against the recruitment by the PKK and they would spread to other cities as well. "Those children cannot volunteer since they are very young. Besides, they are children of Kurdish families and some families even voted for the BDP. Even BDP supporters do not want their children to join the organization," she said.

BDP, which bills itself as a party struggling for Kurdish rights and is known for its ties with the PKK, found itself criticized by families and the government over the recruitment of the children. Prime Minister Erdoğan called the BDP and its sister party HDP "to withdraw the children from the mountains." "Cries of those mothers should be heard by everyone," Erdoğan said in a speech earlier this week. He said if the BDP fails to "bring back the children," the government had "other plans in store for the return of children," though he did not elaborate on those plans. As criticism mounted, BDP co-chairman Selahattin Demirtaş met with protesting families yesterday and pledged he would contact "Kandil," referring to the PKK headquarters in Iraq to secure the children's release.
RELATED TOPICS