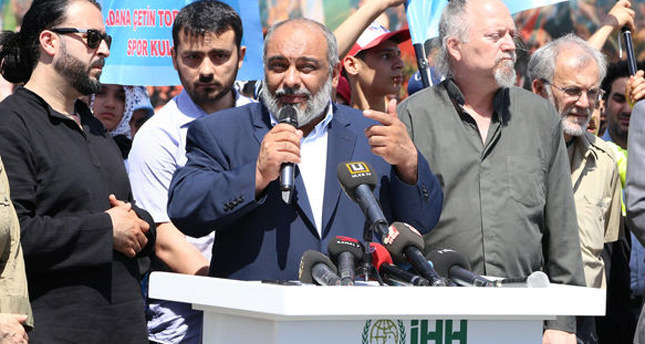 by Daily Sabah May 30, 2014 12:00 am
ISTANBUL — A day before the 4th anniversary of the Mavi Marmara flotilla attack, a press release was held by Bülent Yıldırım, the head of the Turkish NGO IHH (Humanitarian Relief Foundation) Friday in Istanbul's Sarayburnu port. He described the Israeli actions against Palestinians as a "silent genocide" and said Israel was doing exactly the same thing Adolf Hitler did to the Jews.

Bülent Yıldırım said thanks to Istanbul's Seventh High Criminal Court's decision of releasing arrest warrants to 4 senior Israeli officers over their role in the Mavi Marmara attack, Israel got acquainted for the first time with termes such as arrest, trial and red bulletin. He added from now on when Israel bomb a place, it will also see the imposition of embargo.

On 31 May 2010, nine peaceful activists, nine Turkish, including one Turkish-American, were killed by the Israel Defence Forces, when the israeli commandos raided the Mavi Marmara flotilla seeking to break the blockade imposed on the Gaza Strip.

Several thousands of people are expected to march from Sultanahmet to Sarayburnu tomorrow.