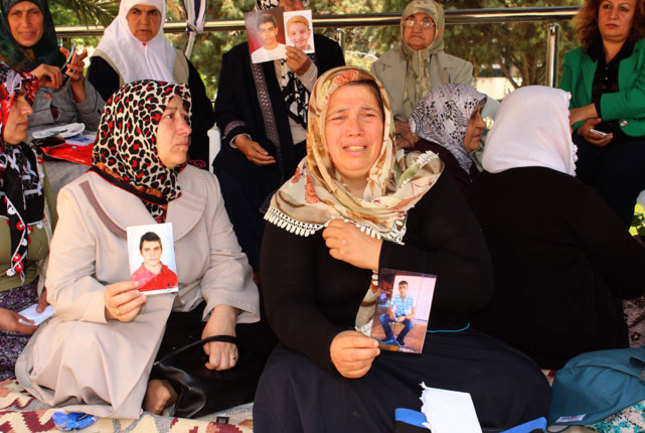 Kurdish families calling on the PKK to return their kidnapped children refuse to end their Diyarbakır sit-in, while more families join to support the return of the children

ISTANBUL — The number of Kurdish families protesting their children's allegedly forced recruitment by the terrorist organization the PKK in the southeastern Turkish province of Diyarbakır rose yesterday, where they continued their sit-in. Parents from other cities also joined the protest while an opposition party announced that they would hold talks with the PKK for the release of children. Families cried out, "Zarokên me vegerînin," which means "Bring back our children" in English. The sit-in held in front of Diyarbakır Municipality started on May 19 by two mothers whose 15-yearold children were lured by the PKK. On Wednesday, the number of people accompanying the two mothers reached 30 and yesterday 46 as families claiming their children were taken from the eastern cities of Erzurum and Kars, the southeastern province of Mardin and the western province of İzmir, participated in the protest. Though some children are above the age of 18, the age of consent, parents believe they were brainwashed or coerced into enrolling.

The ages of individuals recruited by the PKK vary from 12 to 23. Sıddıka Altan, one of the mothers, claims her 18-years-old son has been "in the hands of the PKK" for 36 days while Hatun Yılmaz's 23-year-old son joined the terrorist group one month ago. Meryem Günay says her son Özcan, 14, was persuaded to join the PKK two months ago.

Families met with Selahattin Demirtaş, cochairman of the Peace and Democracy Party (BDP), known for its close ties with the PKK. Demirtaş promised families that he would contact "Kandil" for the release of their children, referring to the name of the mountain in northern Iraq where the PKK command is based. Wailing parents are encouraged by this development but they are still considering to continue their protest until June 1, World Children's Day and until they are guaranteed that their children would be returned.

Speaking on behalf of parents, Selami Eren, father of 15-year-old Fırat Aydın Eren, whose mother started the protest in Diyarbakır, said the Turkish public supported their protest and thanked everyone supporting their "legitimate and righteous" protest including "the prime minister, nongovernmental organizations and political parties." He said their meeting with Demirtaş was a positive development. "We trust him," Eren told reporters. He called on protesters not to fall for "any provocation." Two families who stormed the local office of the BDP engaged in a brawl with BDP officials the previous day. The PKK has made a statement that claimed families were "exploited by Turkey to curb enrolment in the organization."

Süreyya Toklar, who hails from the eastern city of Van, told Anadolu Agency that her 14-years-old son Efekan was forced to join the organization. "He has epilepsy and takes medication. He cannot sleep alone and is afraid of dark. He can't live where they (PKK members) live. My son needs me and I beg them to give him back to me," she said. İffet Güneş, another mother, said her 18-years-old daughter left for a picnic with her friends on April 23 and she did not hear from since then. "She is my only daughter. I want her back. I want peace. I have a heart disease and I may die if she does not come back," Güneş said.

Lütfiye Bozoğlu, 20, whose 20-years-old son Sedat joined the terrorist organization on April 10. "I didn't raise him for this. I will not leave here until he returns," she said. Bozoğlu stated she decided to join the protest when she saw other women in the news. The protest found support from the government with Prime Minister Recep Tayyip Erdoğan vowing to bring back the recruits if the "BDP and (its sister party) HDP cannot." Speaking yesterday, Deputy Prime Minister Bülent Arınç said the families' sit-in was "an innocent protest." "This is a protest by mothers and mothers are always sincere in their feelings in such matters.

This is why similar protests by mothers of prisoners in the past garnered public support," he said, referring to Saturday Mothers, a group of mothers who staged protests every Saturday in the 1990s over their children's so-called "disappearance" in detention and bad conditions of prisons where their children are held.

"If you have faith in the reconciliation process, you should know that this process cannot be completed if children are deceived into going to the mountain," he added, in reference to mountainous areas in southeastern Turkey and bordering Iraq where PKK members are based. "Progress in the process can only be achieved if those in the mountains lay down arms and return and engage in politics and express their views instead of [fighting]," he said.

The reconciliation process is a government initiative to end PKK terrorism and restore the rights of the country's Kurdish community.
As part of the initiative, Turkish authorities launched talks with Abdullah Öcalan, the jailed leader of the terrorist organization and this was followed by a de facto ceasefire by the PKK that announced it withdrew from the Turkish territories. Referring to the BDP, Arınç stated that politicians who claim to represent "our Kurdish brothers," should share the grief of protesting mothers and ensure their return.
RELATED TOPICS