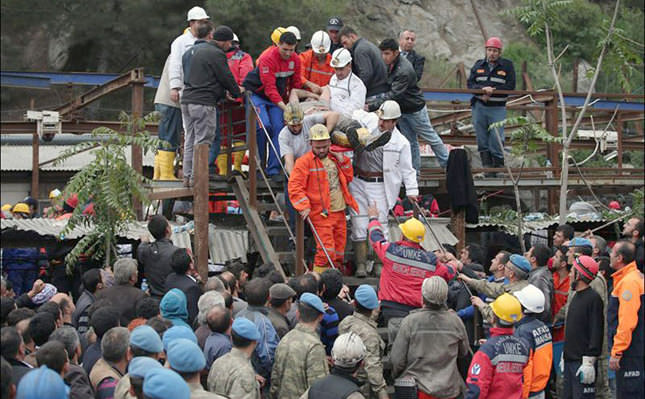 by Daily Sabah May 30, 2014 12:00 am
ISTANBUL — In a statement to the prosecutor investigating the mining accident that occurred in the western Turkish town of Soma, a mine worker reveals the extent of negligence on the part of the mining company.

Eynez mine operated by Soma Holding was the scene of a fire on May 13 that killed 301 miners. Initially, a faulty power distribution unit was blamed for the explosion that caused a fire in the mine but a report by experts appointed by prosecutors indicated that coal in the mine was exposed to air and overheated due to negligence. Miners died of carbon monoxide poisoning as they tried to leave the site, and a lack of safety measures for trapped miners drew public outrage.

Abdulhakim Bilen, an electrician working at the mine, is among the workers who testified to prosecutor Adem Aktaş on the cause of the accident. He said the energy supplies to the mine would automatically shut down when a 1 percent level of methane gas was detected in the mine and the company decided to enable automatic shutdown at 0.5 percent as a safety measure.

"But the production stalled due to shutdowns as cutting off power supply halted the production. Then, supervisors started ignoring the shutdowns. They would restart the supply and order us to return to work after switching off sensors detecting the gases," he said. Bilen also said company officials replaced flameproof telephones used for communication in the mine with fake ones before inspections. "They knew in advance when the inspections would be held and used to place fake telephones. The real telephones were not working since they didn't have communication infrastructure in the mine. The ones that were working were placed in the wrong spots. People in one part of the mine were not able to communicate with miners in another part. That was the case as well at the time of the accident," he said. Bilen also said the company distributed gas masks to miners for protection but they were defected.

The electrician claimed inspectors only partially examined the mine. "The company knew which part of the mine the inspectors would check out and they ordered us to make that part appropriately secured against any accident. In the latest inspection, they told us to place flameproof telephones on two parts but we were not able to place them there in time. So, the company officials told us to put them in another gallery. We did it and inspectors checked that gallery only. If they checked it properly, they would know that the telephones were fake"

He also claimed he did not undergo any training when he started working in the mine and instead he was told to sign an official document showing he underwent training.
RELATED TOPICS