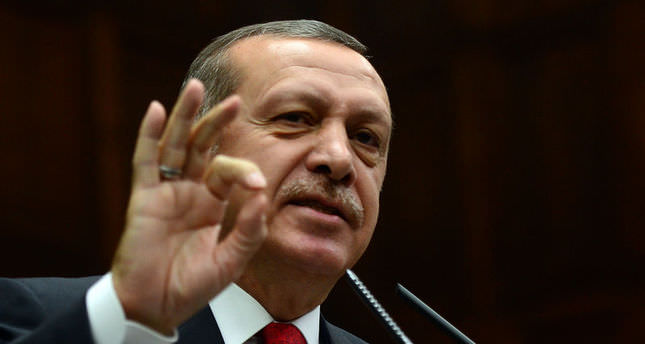 by AA May 31, 2014 12:00 am
ANKARA — The demonstrations which were called for to mark the first anniversary of the Gezi Park protests aim to set streets on fire and to exploit each and every incident, Prime Minister Recep Tayyip Erdoğan said Saturday in his televised address to the nation.

PM Erdoğan said the Turkish state and people had no patience left for these people who are "devoted to violence."

"As you know, they first held Gezi Park demonstrations, and this was followed by the December 17 operation. Now they intend to repeat the same old scenario to overwhelm streets of Istanbul with violence. This is an act of terrorizing the streets to destroy our peace and tranquility."

The original Gezi Park protests began as a small environmental demonstration on May 31, 2013, and mushroomed into nationwide anti-government demonstrations in the subsequent months.

The Taksim Solidarity -- an umbrella group of protesters -- has called for a rally in Taksim near the Gezi Park, a leafy park in the heart of the city.

"Our nation preserved its patience, commonsense and honor throughout the year and it will definitely be the same today or tomorrow," Erdoğan said.

Regarding the presidential election due on August 10, Erdoğan said, "Neither the election nor the period afterwards will create any weakness or uncertainty. It will strengthen Turkey."

"Turkey is proceeding to future with hope, confidence, peace and fraternity. We will not allow the puppets left in the streets by the enemies of Turkey to once again harm this peace and stability. They tried to take us back to 1960 with the Gezi Park incidents."

On May 27, 1960, Turkey's military overthrew then Prime Minister Adnan Menderes, who was executed in September 1961.

Referring to May 13's coal mine disaster in western Turkey, Erdoğan reaffirmed that possible faults, negligence and discrepancies would be investigated and necessary action would be taken.

"We are increasing measures to avoid such calamities and will enhance our laws and inspections," he said.