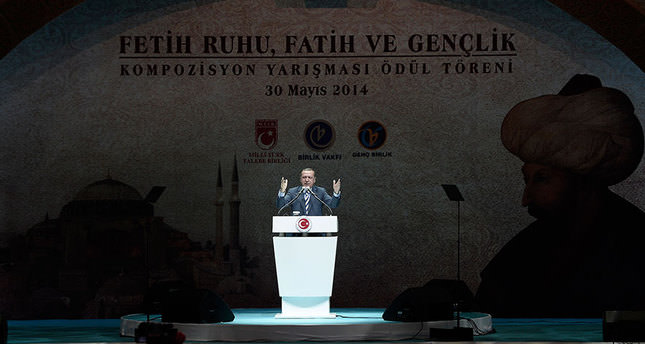 by AA May 31, 2014 12:00 am
ISTANBUL — "Those who desire to inflict Turkey more pain and to cause more deaths are preparing to take center stage again at the anniversary of last year's Gezi Park protests," Turkish Prime Minister Recep Tayyip Erdoğan said Friday.

"They rehearsed for this a year ago. They exploited our youth to damage Turkey's economy, to harm Turkey's reputation," Erdoğan said in an event in Istanbul that celebrated the 561st anniversary of the city's conquest by the Ottoman Turks.

The Gezi Park protests began as a small environmental demonstration on May 31, 2013, and mushroomed into nationwide anti-government demonstrations. The protests erupted in May after the government moved to implement a redevelopment plan for nearby Taksim Square which reportedly included replacing part of Gezi Park with a mall.

"Nowadays they want to revive this trap [...] Some pseudo-artists, quasi-intellectuals are calling for new riots to cause new destructions, new deaths, new pains, but the youth in Turkey will not permit this," Erdoğan said.

"Where there is no thought and opinion, there is violence; those who took to the streets in Gezi Park protests had no thoughts," he added.

Crowds are expected to be on the streets near Gezi Park on Saturday, as the Taksim Solidarity Group -- an umbrella group of protesters -- called for a gathering to mark the protests' first anniversary.

On Wednesday, Istanbul Governor Hüseyin Avni Mutlu said that no demonstration would be allowed near Taksim Square and that security forces would take necessary measures on Saturday.