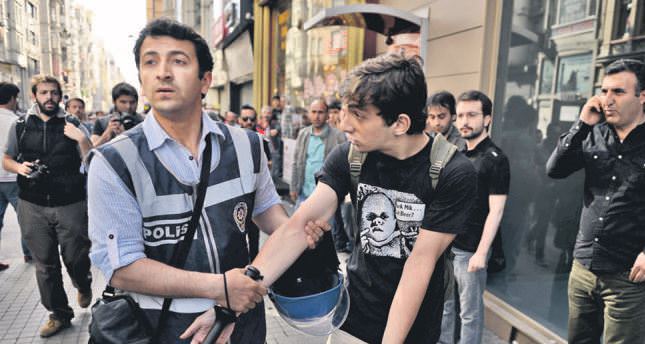 At least 11 police officers were wounded during the protests and another 12 civilians were taken to hospital. Among the wounded are an officer injured by a bullet and two officers wounded by Molotov cocktails thrown by protesters, police sources said. "A total of 23 vehicles - nine of which were police vehicles - were damaged by protesters who threw rocks and Molotov cocktails," the statement read. According to the statement, police have also confiscated materials including 27 Molotov cocktails, various sizes of iron and glass balls shot at police, 14 gas masks and some fireworks. In the western province of İzmir, 72 people involved in riots were released after a brief detention while one person was arrested.

İzmir also saw clashes between rioters and police. In the capital Ankara, 118 people were detained over the past two days for clashing with police. Those suspects were released yesterday. Most suspects faced charges of holding unauthorized rallies which carry light sentences. Detentions in connection with this charge often conclude with the release of the suspect on probation, pending trial and fines.
Demonstrations to mark the first anniversary of the Gezi Park incidents failed to garner support, especially in Istanbul, but occasional riots broke out in districts near Taksim Square, which was sealed off by the police. Radical groups affiliated with terrorist organizations
continued to clash with police over the weekend.
RELATED TOPICS