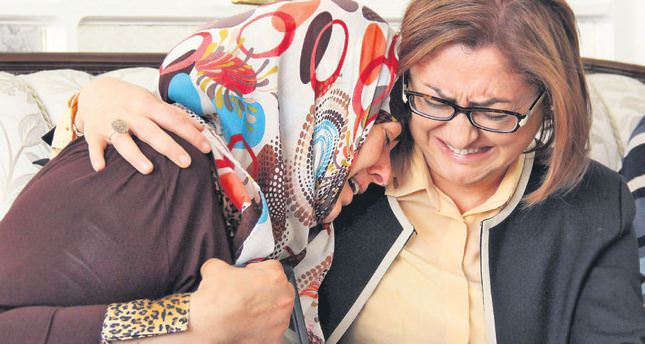 by Daily Sabah Jun 03, 2014 12:00 am
ISTANBUL — Kurdish families, who have been continually protesting for two weeks, have been threatened with evacuation from the environs of Diyarbakır municipality while silence continues as to the whereabouts of their children who were kidnapped by the terrorist PKK. Officials from the municipality run by pro-Kurdish Peace and Democracy Party (BDP) had evacuated the families from the space in front of the municipal building, where they have been staging a protest since May 19, forcing the families to move to a square across from the city hall. Families confronted the municipality officials again yesterday when they took their protest to another site near the city hall as municipality workers moved to "clean" the square where they were conducting their protest. Diyarbakır police intervened to break up the quarrel between two sides.

Speaking on behalf of the demonstrators, Erhan Eren, brother of a 15-yearsold Fırat Aydın Eren who is believed to have been tricked into joining the PKK, said 76 families were in Diyarbakır to join the protest and currently, 47 families were actively attending the sit-in.

Eren said their main purpose to start the protest was to seek support for the return of children from Peace and Democracy Party (BDP), the opposition party affiliated with the PKK, but the BDP did not support them. "They expelled us from the city hall because we don't want anyone to take up arms," he said.

Eren said those that have claimed oppression in the past have become "oppressors", referring to the officials of BDP advocating compensation for "oppression" of Kurds by the state. "Their treatment of families reminds us of past policies of the state towards Kurds. Peace will prevail through the uprising of these mothers but those benefiting from the conflict ignore us. So, we will continue our protest until we bring back those children," he said.

Eren also condemned a municipality official's alleged remarks branding them "traitors" to the Kurdish community. "They owe those seats they occupied in the municipality to our votes and we will adopt a tougher stance from now on. Mothers stood up and no one can stop it. It will end only when they accept peace," he said. Eren claimed over 6,000 high school and university students were recruited by the PKK.

The families moved to the front of city hall because they believed "the city" could handle negotiations with the PKK for the release of recruits, as the BDP has contact with the terrorist organization. The outcry over the "abduction and brainwashing" of children is not confined to Diyarbakır. Kurdish families living in many cities also express their support for the protest.

The Esendemir family in the southeastern province of Gaziantep is among them. Their 20-year-old daughter was "abducted" by the PKK 14 days ago. Gaziantep Mayor and former Minister of Families Fatma Şahin paid a visit to the family and heard their story amid tears.
Büşra Esendemir was studying teaching when she joined the PKK. Her father Muharrem Esendemir said he last saw his daughter on April 23 and talked to her on the phone on May 18. He claims his daughter did not harbor any sympathy for the PKK though he found a letter in the house Büşra was staying in in the eastern province of Kars where she was attending university. Büşra wrote she joined the terrorist organization but her father refuses to believe she wrote the letter herself, concluding she was forced to write it. "I told her to attend a university near our hometown. I didn't want her to stay in Kars because I heard she was involved in (PKK activities). She accepted and was preparing to take an exam for transfer to a university in Gaziantep. She was ambitious and wanted to graduate. She always dreamed of teaching children. I don't know what happened but I am sure that she was brainwashed," the father said. Calling on the PKK to release his daughter, Muharrem Esendemir said she would better serve her community "by educating Kurdish children, not fighting in the mountains."

During her visit to the Esendemir family, Fatma Şahin telephoned the Prime Minister Recep Tayyip Erdoğan. Speaking to the parents on the phone, Erdoğan promised the government would exert efforts to retrieve their daughter. Şahin stated that most parents in the region were afraid to voice their opposition to the recruitment of their children because of "a sense of fear" instilled by the terrorist organization despite the reconciliation process initiated by the government that reinstated peace and allowed families to raise their voice against recruitment.

Şahin said the women in the BDP were aware of the ordeal the Kurds went through. "Diyarbakır Mayor Gültan Kışanak should know this. HDP lawmaker Pervin Buldan lost her husband in a murder. They know how those mothers are suffering. I call on them to help those mothers," she said. The BDP and its sister party HDP have been conspicuously silent on the issue although the BDP lawmakers criticized the government for "exploiting the mothers for its own political agenda." Officials from the BDP met with the families and pledged to talk to the PKK officials for the return of their children while a delegation from the HDP visited the jailed PKK leader Abdullah Öcalan and reportedly discussed the matter. However, Öcalan, still an influential figure in the terrorist organization, did not release a statement on the issue.
RELATED TOPICS