Dutch officials to blame for deaths in 2009 plane crash 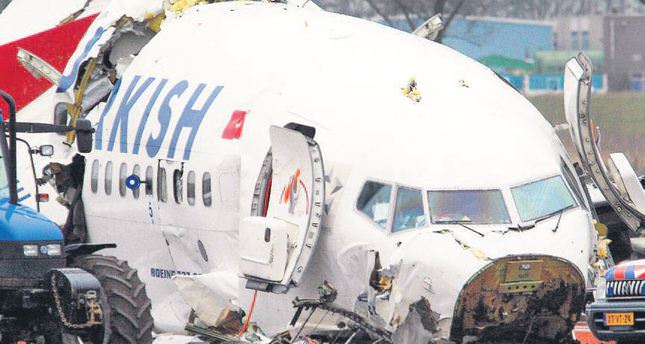 by Daily Sabah Jun 04, 2014 12:00 am
ISTANBUL — According to a new report, Dutch authorities' handling of a Turkish Airlines plane crash in the Netherlands had its shortcomings due to inadequate medical care for survivors, contributing to a higher number of casualties.

Turkish Airlines Flight 1951 crashed during landing at the Amsterdam Schiphol Airport on Feb. 25, 2009, killing nine people including three pilots and injuring 86 others. The crash was blamed on a faulty altimeter that led to a loss of speed and eventual crash in the landing which broke the plane into three pieces. Dr. Ingri Postma, an expert from Amsterdam Medisch Centrum hospital, conducted research on
the medical response to the crash.

According to Postma's report on the crash, 121 people who survived the crash did not undergo proper medical treatment. For instance, most of the injured were not carried on stretchers that would not inflict further injury on those sustained wounds on their neck and spinal cord and it was against the protocols related to the first aid to victims of such crashes. Only 25 percent of the injured were carried on appropriate stretchers.

The report also noted ultrasound, x-ray, electrocardiography and other medical imaging methods which should be applied to the crash victims were not conducted properly and did not cover all the victims. Only 70 percent of the passengers underwent medical scans against
internal injuries.

All survivors should be monitored thoroughly for a likely trauma that is difficult to detect immediately in the aftermath of the crash but this was not the case in the Schiphol crash, according to Postma's report. More than half of the survivors underwent the monitoring process but according to international rules related to the crash response, all survivors should undergo examination for trauma.

Another significant mistake according to the report was the transfer of injured survivors to hospitals far from the crash site. Despite hospitals near the site being able to accommodate the survivors, passengers were carried to hospitals some 50 kilometers away from the airport.

Dr. Postma concluded that the consequences of the crash would be more serious if the crash were more largescale.

Dutch safety board Investigation Council for Safety had noted shortcomings in a previous report that indicated a failure of communication between emergency services, delay in reaching the scene and access to the medical history of passengers.

Ingri Postma prepared a new emergency response protocol in light of the report regarding the Turkish Airlines crash. The protocol will be applied at Dutch hospitals in the case of largescale accidents.
RELATED TOPICS