Turkey is in compliance with EU environment norms 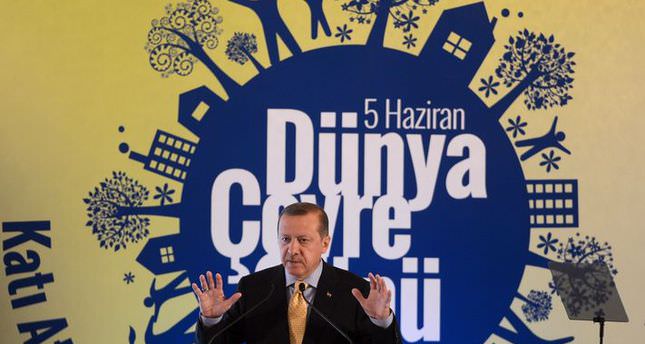 by AA Jun 05, 2014 12:00 am
ANKARA — Turkey is in compliance with all environment norms set by the acquis communautaire - European Union law," said Turkish Prime Minister Recep Tayyip Erdoğan, speaking on the World Environment Day at the inaugural ceremony of a refugee processing center Thursday.

"Nature is in the trust of God and we are obliged to protect it," he said adding that "We belong to a civilization that does not permit the unnecessary picking of even a tree branch or a flower," he said.

Erdoğan said that Turkey was forced to pay the price with years of long neglect in environmental issues but now the country intends to develop cities that "will inspire poets, writers and artists."

Erdoğan, commenting on last year's Gezi Park incidents and the recent anniversary protests said, "the so-called Gezi Park activists have nothing to do with environmental issues but they are the agents only of destruction and provocation."

"While some of the developed countries withdrew from the Kyoto Protocol, Turkey joined it in 2009," Erdoğan said in reference to the first agreement between nations to mandate country-by-country reductions in greenhouse-gas emissions.

The original Gezi Park protests began as a small environmental demonstration in May last year and turned into nationwide anti-government demonstrations.

The protests erupted after the government moved to implement a redevelopment plan for nearby Taksim Square which allegedly included replacing part of Gezi Park with a mall.