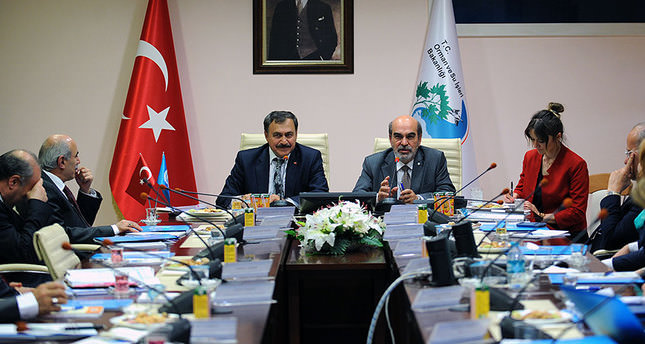 by AA Jun 05, 2014 12:00 am
ANKARA — Turkey and the United Nations' Food and Agriculture Organization have signed a cooperation agreement aimed at supporting forestry in the Balkan and African countries.

"We will be able to begin and support forestry projects in the Balkan, Central Asian and African countries."

Minister Eroğlu said Turkey will use its experience and work to help Turkic republics and North African and Middle Eastern countries gain growth in forestry businesses.

Eroğlu stated that Turkey would now be able to help North Africa, where a lot of areas are at high risk of losing top soils and becoming deserts.

He said: "I want to stress that these works are important not only for Africa, but for the whole world and further work will be done to prevent erosion.

"Our works will be an example for the whole world."

"This agreement will not only increase projects in Turkey, but will boost ones in Africa," said da Silva.

As a supplementary agreement, Turkey also signed the second phase of the FAO-Turkey Partnership Program (FTPP) with a trust fund contribution by the government of Turkey of $10 million for the next five years.

In a keynote speech, Minister Eker said: "Our main aim is to use allocated resources effectively and be more beneficial to brother countries.

"As the Republic of Turkey, we would like to give the maximum support to fragile and sensitive countries of the region and make them get the most out of this program."

Da Silva said that Turkey was one of the world's main agricultural producers and top exporters of many crops, ranging from nuts to fruits, and praised its efforts towards food security.

"I am pleased to see Turkey' s commitment to food security and sustainable development is not limited to national boundaries." he said.