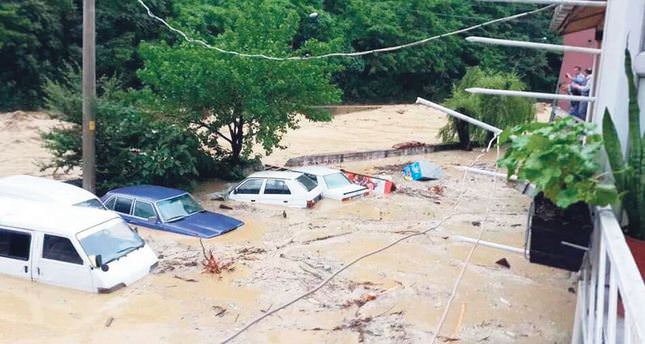 by Daily Sabah Jun 07, 2014 12:00 am
Heavy rains over the past few days have sparked flooding across the country, wreaking havoc in several provinces. In Zonguldak, the Acılık River burst its banks, submerging large parts of the region. Officials say one person has been confirmed dead, with officials trying to
rescue dozens trapped by rising waters. Turkey's northern and central provinces were battered with heavy rainfall that triggered flash floods on Thursday and Friday. Heavy rains that have gripped Turkey's northwest earlier this week have now engulfed the country's other provinces.

Zonguldak, a province in the Black Sea region was particularly hit hard with incessant rain which inundated towns, trapped residents and led to the collapse of roads.

The highway connecting the province to the capital Ankara in the south was closed on Friday due to collapses and heavy damage on some parts of the road. Floods which engulfed Zonguldak for two days also shut down roads to villages in the vicinity of central province. A river overflowing its banks submerged the lower floors of houses.

Fallen trees and excessive floodwaters led to closures in many roads in the province. Heavy rainfall also led to power outages. Meteorology experts stated that 90.2 kilograms of rain per square meter fell in Devrek, a district of Zonguldak.

Garbage from the rivers overflowing their banks caused pollution at province's main port by the Black Sea.

A bridge was collapsed in Zonguldak due to floods. Six people stranded in a building were rescued by crews. The floods killed livestock as the floods covered farms in the villages.

In Alaplı, a district of the province, 47 people stranded in houses and their cars were rescued by firefighters. In Çankırı, a province near the capital Ankara in central Turkey, a 9-year-old boy was drowned while his family barely escaped the floods. The floods also hit Honaz, a district of Denizli in the western Turkey but farmers suffered most from the floods that destroyed their crops.

In Mudurnu, a district of the northern province of Bolu, students were stranded in a school due to floods inundating the area. They were rescued by their families and police.

Dozens of buildings were inundated in the district. Rainfall also tore down heavy rocks from the hills overlooking the district. Large rocks smashed scores of cars.

Weather forecast show heavy rainfall will especially bear down on Adana, Osmaniye, Hatay and Kahramanmaraş, four provinces in the southern Turkey on Saturday. Adana was also scene of the floods on Friday that trapped people in their houses and destroyed a bridge.

The capital Ankara also suffered from the heavy rainfall that triggered floods. Workshops, factories in Ostim, an industrial zone, were inundated. In the Batıkent district, a subway station was flooded when the road above was collapsed under heavy rain. Istanbul, country's most populated city that was a scene of chaos due to unprecedented rainfall earlier this week, was also gripped by the rainfall on Friday although it did not trigger floods similar to the ones on Monday.
Last Update: Jun 07, 2014 8:41 am
RELATED TOPICS