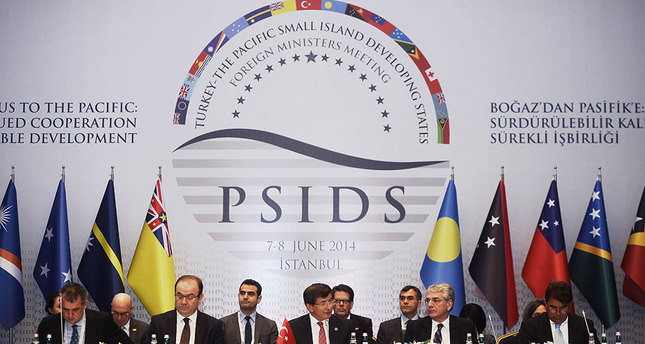 by AA Jun 07, 2014 12:00 am
ISTANBUL — Turkey will provide significant added value to global peace and security when its candidacy for non-permanent membership in the UN Security Council is approved, Turkey's Foreign Minister has said.

Speaking at a joint press conference with President of Kiribati, Anote Tong, on Saturday, Ahmet Davutoğlu said Turkey's application for membership came during an era of critical and rapid change in international affairs.

He said: "Turkey plays a constructive role regarding all issues on the U.N. agenda and, therefore, attaches special importance to undertaking active duties and responsibilities within the UN system and other international organizations."

His comments came as the two leaders, accompanied by a number of ministers and high-level officials, were attended a meeting of Ministers of Foreign Affairs of Turkey and the Pacific Small Island Developing States (PSIDS) in Istanbul.

President Tong voiced his support for Turkey's candidacy and said he was content with initiatives Turkey had undertaken in the Pacific region.

Hosted by Davutoğlu, the weekend meeting was held under the theme: "From Bosphorus to the Pacific: Continued Cooperation for Sustainable Development" in order to draw attention to the environmental, economic and social challenges faced by the countries, the limited resources they possessed to meet them and to discuss face-to-face what could be done in solidarity with the Pacific countries.

Pointing out that the meeting was a follow-up to the Turkey-Pacific Islands Ministers of Foreign Affairs Meeting hosted by Turkey in April 2008, Davutoğlu said the meeting was well-timed to take stock of relations and draw a "road map" for the future.

He said: "Turkey has been expanding its foreign policy horizons including the Pacific. The meeting in 2008 was a key milestone in our relations with the Pacific.

"In the last six years we have taken important steps in terms of enhancing our bilateral cooperation as well as our institutional ties with the Pacific Islands Forum."

He said a Joint Declaration on the Establishment of Diplomatic Relations with the Pacific island country of Niue was signed at the meeting.

"With Niue added, we have diplomatic relations with all Pacific Island Forum countries," he said.

Turkey's initiatives in the region include more high-level contacts, enhanced development assistance and cooperation in the framework of regional platforms, Davutoğlu said.

He added that it was a valuable opportunity to carry Turkey's bilateral and multilateral cooperation further on issues such as economic relations, development assistance and climate change.

The Turkish FM underlined that the UN had declared 2014 as "the International Year of Small Island Developing States", adding: "We know they have made important efforts nationally and regionally to incorporate sustainable development principles."

He expressed solidarity with the government and people of the Solomon Islands in the face of the recent flood disaster.

"We will continue to work in solidarity with the Government of Solomon Islands and other disaster relief partners," he said.

Referring to the efforts of the Turkish Cooperation and Development Agency, TIKA, in the Pacific Island countries, he said their work was Turkey's most tangible commitment to sustainable development.

Following the meeting, a number of memorandums of understanding were signed between Turkey and the Pacific Island countries to develop cooperation.