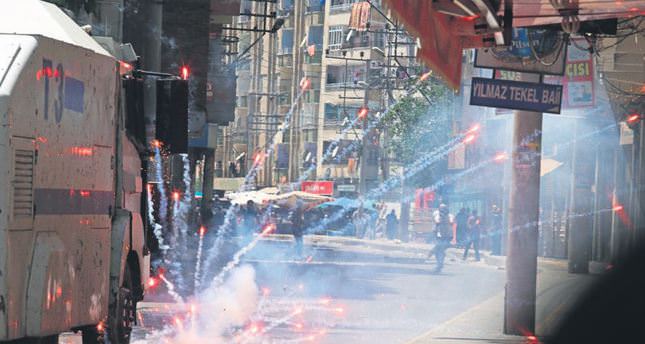 Demonstrations in Lice turn violent, with two killed and two injured, including an army officer

ISTANBUL — Two people were killed and two others, including a soldier, were injured when assailants among a group of PKK supporters opened fire on law enforcement officials attempting to disperse them in the southeastern Turkish province of Diyarbakır late Saturday. A group of protesters affiliated with the terrorist organization PKK were staging a demonstration in Diyarbakır's Lice district against the construction of a military outpost in the area.

A group of protesters affiliated with the terrorist organization staged a demonstration in Diyarbakır's Lice district against the construction of a military outpost in the area. The crowd attempted to block a road connecting Diyarbakır to the province of Bingöl. When soldiers deployed to the area attempted to disperse them, demonstrators hurled home-made grenades, Molotov cocktails and stones at them.

During the clashes, some armed demonstrators among the crowd opened fire on the troops. In the shootout with soldiers, 50-year-old protester Abdülbaki Akdemir was killed while two people including a soldier were injured. Ramazan Baran, 24, another protester injured in the clashes, died at Lice hospital where he had been taken for medical attention. As Baran's body was being handed over to his family at the hospital, a group of PKK supporters converged outside the hospital and threw Molotov cocktails, firecrackers and stones at the riot police deployed there. The police dispersed the crowd by firing water cannons and tear gas.

In a written statement, Turkey's Armed Forces said "a terrorist" was killed when he opened fire on troops. The statement said three PKK members were among the group of demonstrators, adding that others in the group were armed with flash grenades, Molotov cocktails, home-made explosives and firecrackers. PKK members within the crowd of demonstrators opened fire. The statement said a fragmentation grenade thrown by the group injured a noncommissioned officer.

Occasional protests have being cropping up in Lice since late May against the construction of military outposts. Protesters at times clash with troops dispatched to disperse their unauthorized rallies but it is the first time that the clashes have led to casualties.

Protesters affiliated with the terrorist PKK frequently block roads between cities in the southeast by digging up the roads and obstructing them with trucks they hijack. Last week, a group of PKK supporters kidnapped workers at a construction site to use them as human shields.

They placed the workers in a tent and opened fire on security forces approaching the site to incite return fire but their attempt was thwarted when a worker fleeing the tent alerted the troops.

Protests encouraged by PKK militants are not confined to Diyarbakır. Cizre, a district of the southeastern province of Şırnak, was also the scene of a pro-PKK demonstration late Saturday.

A group from the organization's youth wing staged a demonstration in the district to protest the incidents in Lice. The crowd also set up a checkpoint and searched vehicles passing by in the name of the PKK in an attempt to show off the terrorist organization's "rule" in the region.

Riot police engaged in clashes with the crowd, which attacked them with Molotov cocktails. In Bulanık, a district of the eastern province of Muş, PKK sympathizers blocked a road connecting two districts yesterday. Troops were dispatched to the area to remove the blockade. Though most demonstrations involve civilians who are not active members of the terrorist organization, PKK militants also engaged in small-scale, non-fatal attacks in recent days. In the eastern province of Bingöl, militants stormed a construction site for a dam on Saturday night. Terrorists torched trucks and bulldozers at the site and told the frightened staff to shut down the site and leave. In the Ovacık district of the eastern city of Tunceli, terrorists opened harassment fire on a gendarmerie outpost.

Gendarmerie troops returned fire but the terrorists fled the area. The protests and attacks come at a time of government efforts to accelerate the reconciliation process initiated to end the PKK conflict and reinstate the rights of the Kurdish community that makes up the majority of the population in southeastern and eastern Turkey. A workshop titled "The Reconciliation Process: Unlocking the New Turkey" was held in Diyarbakır on Friday to expedite the process with the participation of government ministers, academics, representatives of nongovernmental organizations and prominent Kurdish figures.

The incidents in the southeast follow remarks by government officials and jailed PKK leader Abdullah Öcalan claiming that the reconciliation process is advancing. Despite his imprisonment, Öcalan has significant influence in the terrorist organization where infighting is common and the latest incidents are attributed to dissent within the PKK against the process.
RELATED TOPICS