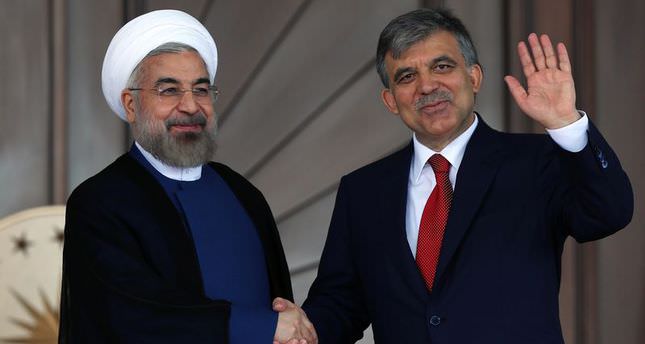 by AA Jun 09, 2014 12:00 am
ANKARA — The first official visit of an Iranian president to Turkey in just under two decades, President Hassan Rouhani's two day visit marks the beginning of a closer relationship between the two countries, said Turkish President Abdullah Gul in a joint press conference on Monday.

Iran's visiting president said Turkey has a "special" place in Iran's thoughts and described his visit as "the turning point" of the two countries' relations and talked about a potential new railway between Turkey and Iran: "Let's join the two countries by railway through Bazargan (an economically significant Iranian border town close to Turkish border)".

President Abdullah Gül told the press conference about the potential of the two countries in being trade partners. The target is to double the current trade volume of $15 billion between Turkey and Iran in the near future, said Gül.

Expressing content over the ongoing negotiations between the West and Iran to negotiate the standards of controversial Iranian nuclear program, Gül said close cooperation between Turkey and Iran is important to establishing peace and stability in the region. Rouhani for his part stressed the importance about Iran's dedication of dealing with global terrorism.

Iran and P 5+1 signed an agreement last November, requesting Iran to suspend its uranium enrichment activities until July 20, in return for easing economic sanctions on the Islamic Republic. Iran though, has diluted half of its enriched uranium in accordance with an interim nuclear agreement the International Atomic Energy Agency reported April 17.

The last official visit to Turkey by an Iran president was when Hashemi Rafsanjani visited Turkey in 1996.

Mahmoud Ahmadinejad made an unofficial visit to Turkey in 2008.