Kurdish families on hunger strike for children recruited by PKK 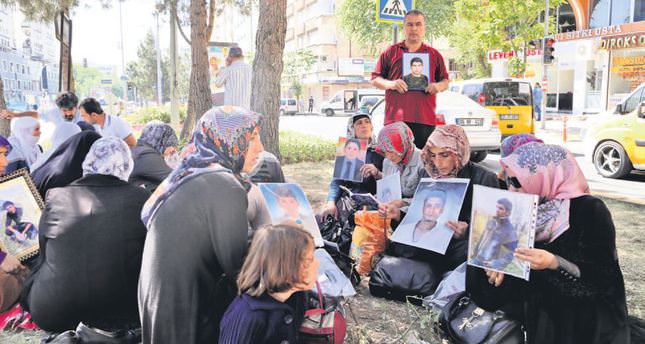 by Daily Sabah with Agencies Jun 10, 2014 12:00 am
DIYARBAKIR — Families of Kurdish children kidnapped by the terrorist PKK began a hunger strike in Diyarbakır yesterday. The families, who were evicted from their protest camp by municipal authorities, also moved to another square.

Families of Kurdish children and the youth persuaded into recruitment by the terrorist organization PKK started a two-day hunger strike yesterday in the southeastern Turkish province of Diyarbakır for the return of their children.

Protesters had paused their sit-in which began on a Sunday in May upon tensions over the killing of a PKK militant and a PKK supporter in the city's Lice district by troops clashing with the terrorist organization supporters.

When they returned to continue the sit-in, parents saw the tents they set up on the median across the Diyarbakır city hall were removed by municipality workers. Workers removed photos of children and flowers brought by protesters' visitors as well under the pretext that they would clean the median where families were sitting since they were evicted from the original protest site in front of the city hall.

Undaunted by the eviction, families recited prayers and started a two-day hunger strike they pledged the previous day. Reşit Koç, father of 19-year-old Zübeyde Koç, said his daughter was tricked into joining the terrorist organization. Koç came from Şemdinli, a district of the Hakkari province near Diyarbakır, to attend the sit-in and subsequent hunger strike. "We will hold [a hunger strike] for our children for two days and if they do not come back, we will go on," he told Anadolu Agency (AA). "We are here for our children and we are in great pain.

The municipality's decision to remove the tents added to our suffering. They had insulted us before and now they are doing this. We are here under the sun but we are determined to continue our protest," he said. The families had argued before with the municipality officials asked them to leave the site.

The Diyarbakır municipality is run by the Peace and Democracy Party (BDP). Officials from BDP which is known for its close ties with the terrorist organization PKK had criticized the protest, claiming the families were "exploited" by the government which supported the sit-in.
After a brief protest outside the city hall, families left for Dağkapı Square of Diyarbakır and told reporters they would continue their sit-in at that square.

Terrorist organization denies forcing children into recruitment but the number of families complaining that their children were deceived into joining the terrorist group quickly multiplied after the sit-in in Diyarbakır that started on May 19. Prime Minister Recep Tayyip Erdoğan urged the BDP and its sister party HDP to negotiate with the PKK for the release of the children whose ages range between 13 and 23 and stated they had "plans in place" if the BDP fails to secure the release. Last week, three girls, including daughter of one of the Diyarbakır protesters, were rescued in an operation in the province of Hakkari. S.B., a high school student among the girls has said that the PKK was persuading young people to join them but most of them regretted going to the mountains with the PKK militants.
Last Update: Jun 10, 2014 1:48 am
RELATED TOPICS