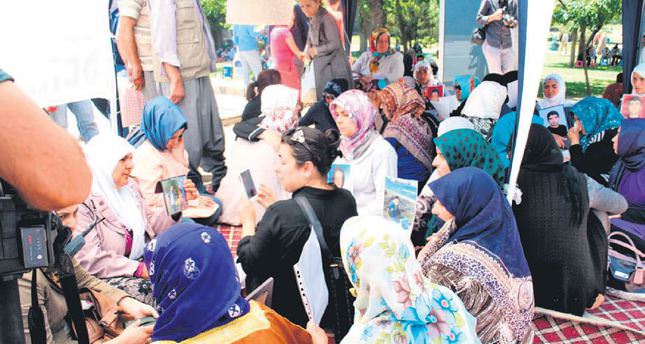 by AA Jun 12, 2014 12:00 am
Mothers of Kurdish teenagers kidnapped by the terrorist PKK ended their two-day hunger strike in Diyarbakır yesterday, but said they would continue their protest until their children were returned.

Mothers of Kurdish youth and children persuaded into joining the terrorist organization PKK ended their two-day hunger strike yesterday for the return of their children, but they will continue their sit-in protest in the southeastern Turkish province of Diyarbakır. Mothers who have been staging a sit-in protest outside the city hall in Diyarbakır since May 19 had started the hunger strike after they relocated to the city's Dağkapı Square on Monday. Zahide Bedir and Bedia Ulutaş, two mothers among hunger strikers were hospitalized on the second day of the hunger strike.

Speaking to the media, Fethi Ulutaş, husband of Bedia Ulutaş, said his wife was already ailing as her kidney was removed due to a disease, and their son Ferdi's recruitment by the PKK worsened her health. "But we will not leave here, we will not end our protest," he said. "Our pain and suffering will continue anyway, so we will stay until we hear from our son," Ulutaş stated.

Forty people, including 30 women and 10 men, attended the sit-in protest at the square. Families had to leave the original site of the protest after the municipality evicted them.

Now in a new location, they adorned the tent they sat under with banners reading "resistance of mothers for peace," "We suffered enough," and "don't arm the children." The banners were written in Turkish and Kurdish accompanied with photos of the children and teenagers who tricked into joining the terrorist organization.

Though their protest failed to bring good news, except for the rescue of three young girls from the clutches of the PKK, families are determined to continue with the protest and the support for their demonstration does not cease. Every day they receive visitors from across Turkey, expressing solidarity with the mothers whose civilian resistance against the terrorist organization was unprecedented.

A delegation from the nongovernmental organization, The Women and Democracy Association (KADEM), paid a visit to the families. Speaking there, KADEM's President Sare Aydın Yılmaz said the mothers' civilian resistance against "cruelty" showed the families they were sided with peace. She said that children were the "future of a country" and the "dirty games" should be ended. Yılmaz said that they believed democratic means would resolve the long-standing problems in the region and the problems of Kurdish community can only be resolved by implementing new social and economic policies rather than taking children to the mountains - the mountainous regions in the southeastern Turkey and northern Iraq where the PKK is hiding out. "Forcing children at school age (into recruitment) is the biggest threat
to the country's future," she said.
Last Update: Jun 12, 2014 1:06 am
RELATED TOPICS