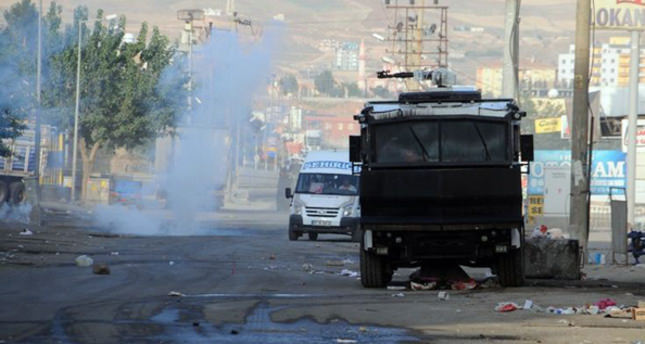 by Daily Sabah Jun 12, 2014 12:00 am
Riots continue to rumble on over last week's killings of a militant from terrorist organization PKK and a civilian protester in the southeastern Turkish city of Diyarbakır's Lice district.

Supporters of the terrorist organization blocked roads and engaged in clashes with security forces attempting to disperse them on Wednesday and yesterday. In Cizre, a town in the southeast, pro-PKK demonstrators wearing masks set up barricades on streets and checked IDs of motorists in the name of the PKK. When they refused to disperse, riot police intervened by firing tear gas and water cannons while rioters hurled Molotov cocktails and stones in return. Similar clashes also erupted in the southeastern province of Batman.

In the eastern province of Ağrı's Doğubayazıt district, a pro-PKK crowd shut down the road between the district and province of Iğdır. Turkish troops dispersed the group. The road connecting the eastern province of Van to Hakkari in the southeast was also blocked on Wednesday by a group of activists from the Peace and Democracy Party (BDP), an opposition party with links to the PKK. The blockade was lifted about five hours after security forces intervened. Turkish troops escalated security measures in the area to prevent a repeat of the blockade.

In Erzurum, an eastern city, nationalist and pro-PKK students engaged in a clash over the incidents in Lice and removal of a Turkish flag from a military base in Diyarbakır after the Lice killings. Police detained 42 students involved in the clash that injured four at the campus.