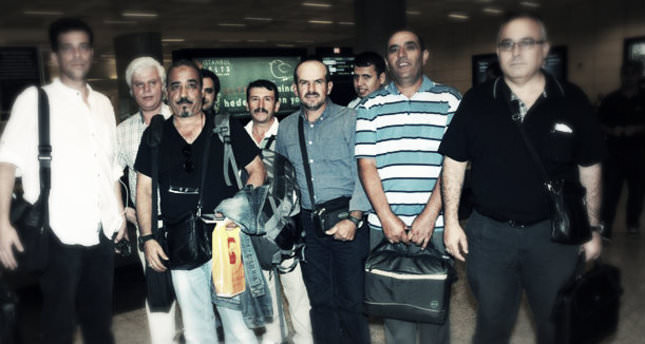 by AA Jun 15, 2014 12:00 am
More than 100 Turkish nationals working for Turkish companies in Iraq have returned home after Ankara warned about the deteriorating security situation amid advances by ISIL militants.

A total of 113 employees were brought to Turkey from Iraq's southern province of Najaf in a plane leased by their company, said Turkey's Foreign Ministry in a statement published on its website on Saturday.

The ministry reiterated its earlier warning against travelling in Iraq and its provinces, saying the worsening security situation remained unpredictable.

Referring to the Turkish nationals abducted by ISIL militants in Mosul last week, the ministry said: "All rescue work is being undertaken with the necessary precision to bring back the abducted Turkish consulate staff and truck drivers to Turkey unharmed, soon."

ISIL militants last week seized 31 Turkish truck drivers who were delivering fuel to a power plant in Iraq, and later kidnapped 49 Turkish consulate members of staff and their families in Mosul.

Unrest in Iraq is running high as ISIL militants have seized two new towns after taking control of Mosul, Iraq's second-largest city, and are threatening to move south towards the capital, Baghdad.