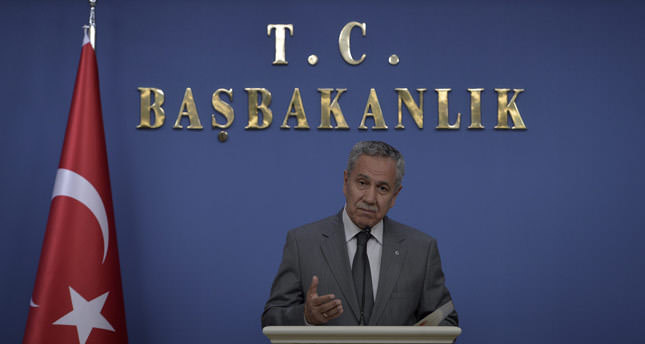 by AA Jun 16, 2014 12:00 am
No stone will be left unturned in order to ensure the safe return of Turkish citizens abducted in Iraq, Turkey's Deputy Prime Minister Bulent Arinc said on Monday.

"Turkey has to safeguard its interests in Iraq while ensuring the safe return of its abducted citizens", he said following the weekly cabinet meeting in Ankara.

"Media should avoid publishing provocative and speculative news regarding the abducted Turkish citizens and the ISIL," he said.

Militants linked with ISIL, or Islamic State of Iraq and the Levant, abducted 49 people from the Turkish consulate in the flashpoint city of Mosul on Wednesday, one day after seizing 31 Turkish lorry drivers.

Asked whether former Iraqi Vice President Tariq al-Hashimi was also involved in negotiations for their release, Arinc said, "Our first and foremost priority is to bring our citizens home safely and we are not excluding anyone expected to be helpful in this regard, including al-Hashimi."

He said that the government was in touch with the Iraqi central government and all other institutions for the safety of Turkey's foreign missions in Iraq as the Iraqi government was responsible for the protection and security of the missions.

"What is happening in Iraq is an outcome of the cruelty used by Iraqi PM Nouri al-Maliki and his Shia government in Sunni areas," Arinc said.

Hashimi was condemned to death under 23 cases and life imprisonment under two cases by the al-Maliki government. The Central Criminal Court of Iraq sentenced him in absentia to death on September 9, 2012. Since April 2012, Hashimi has been living in Ankara.